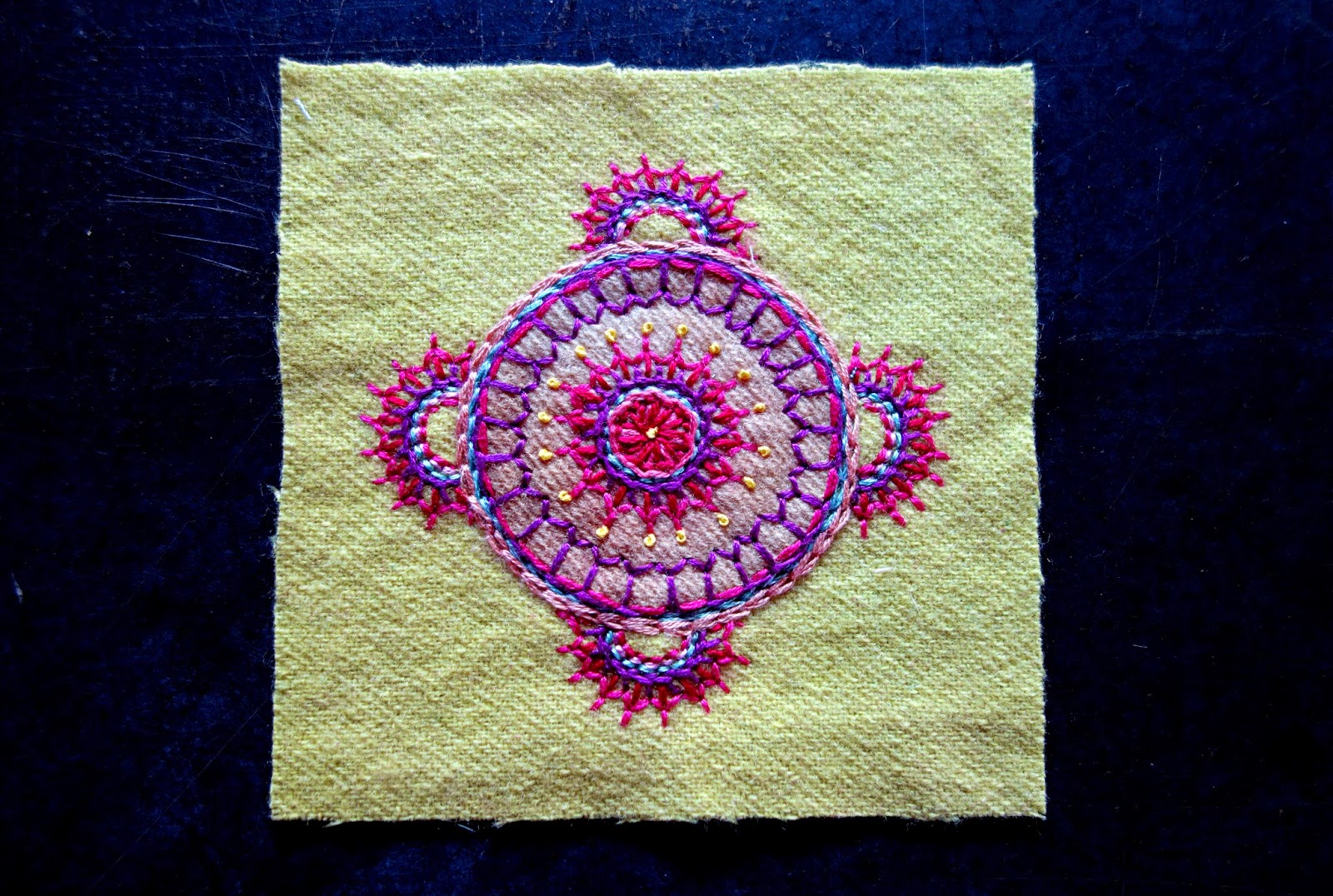 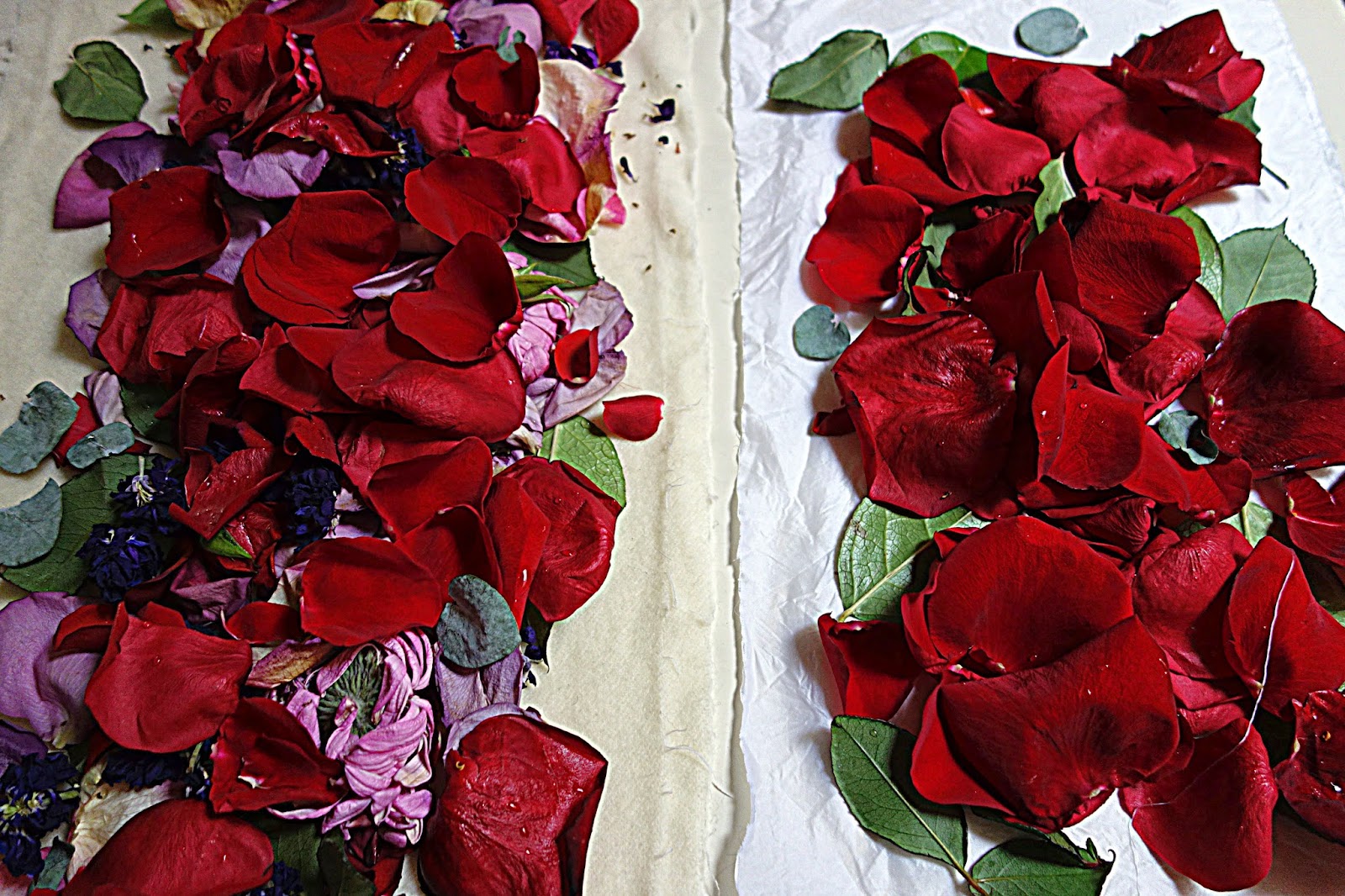 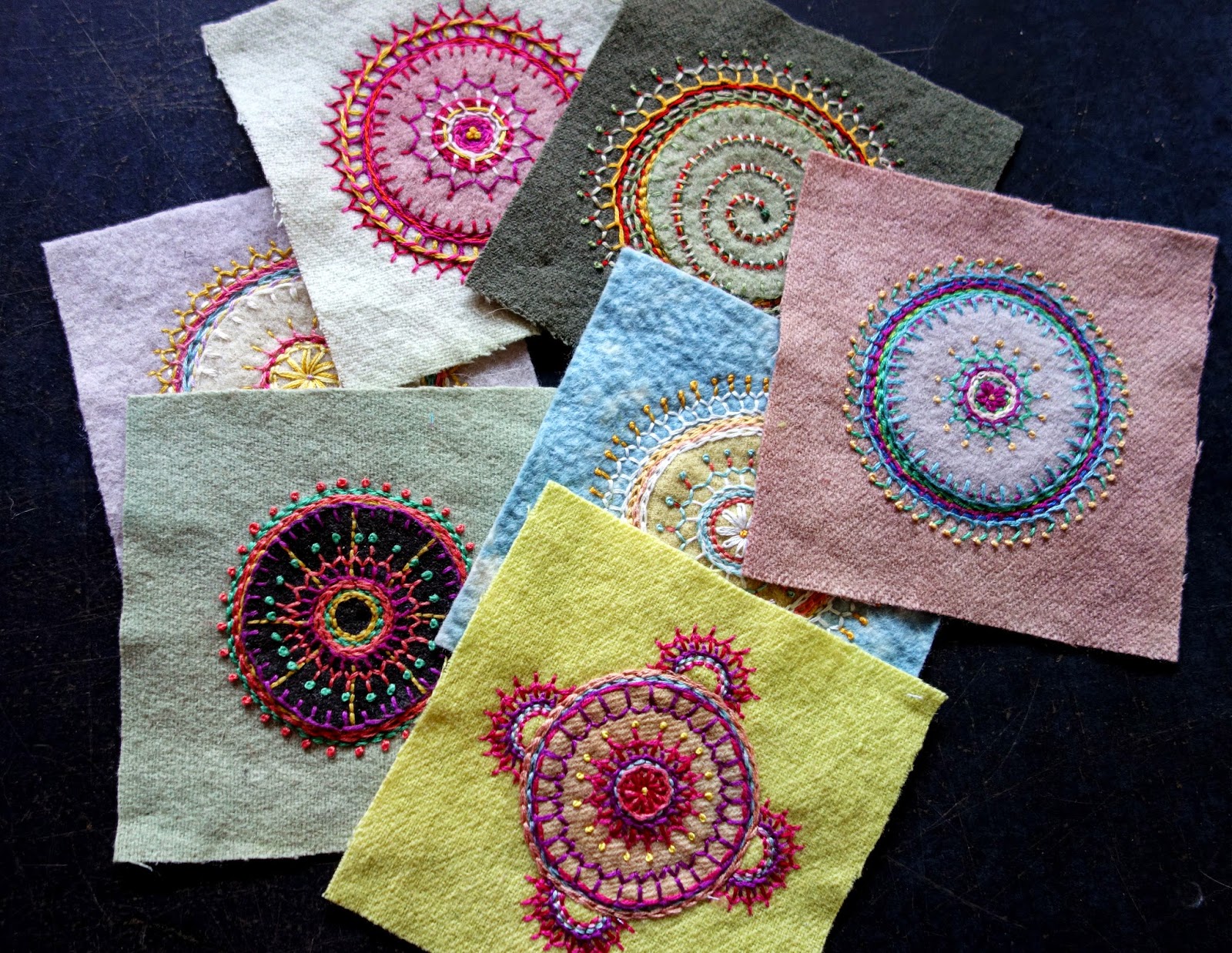 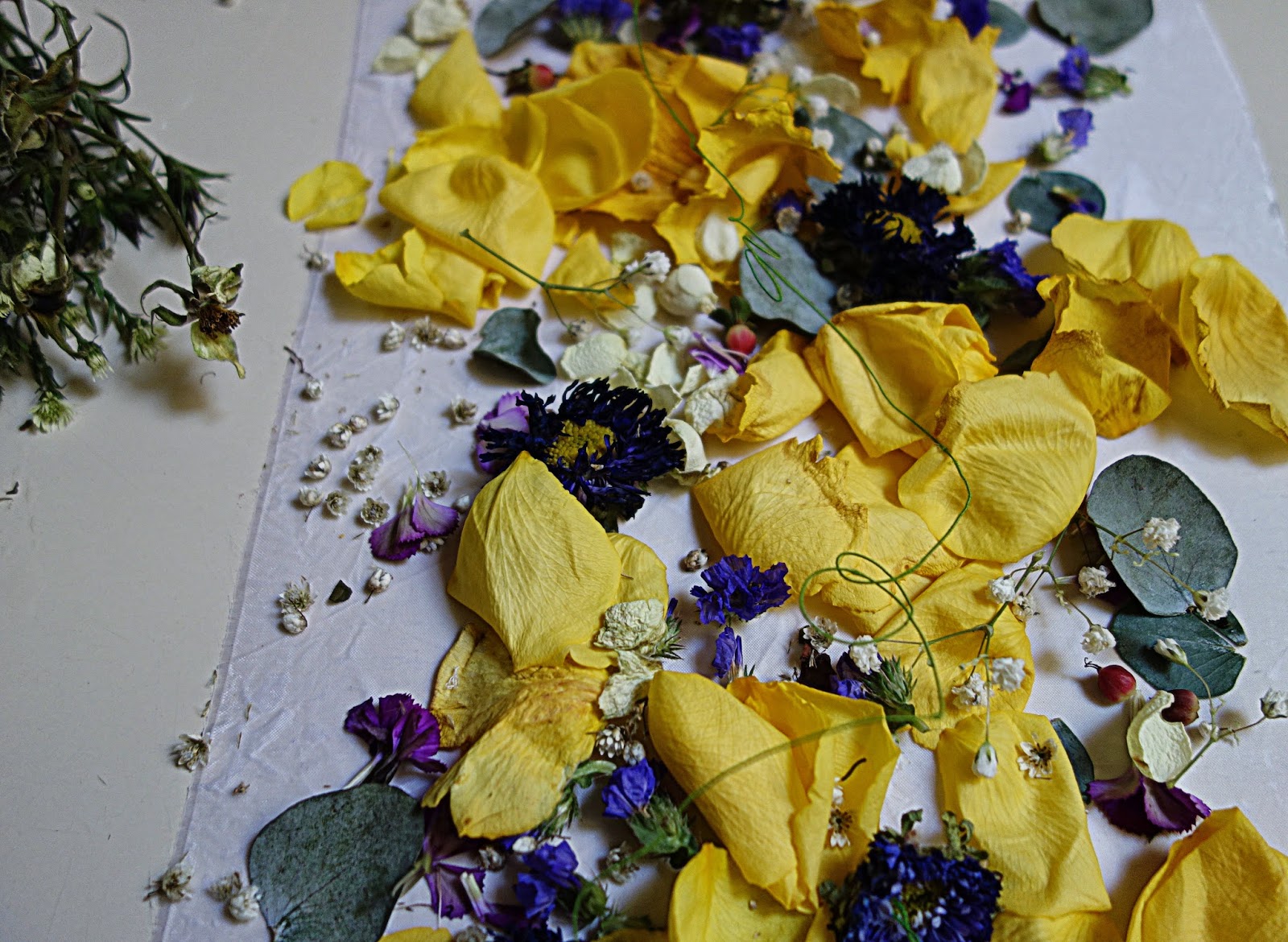 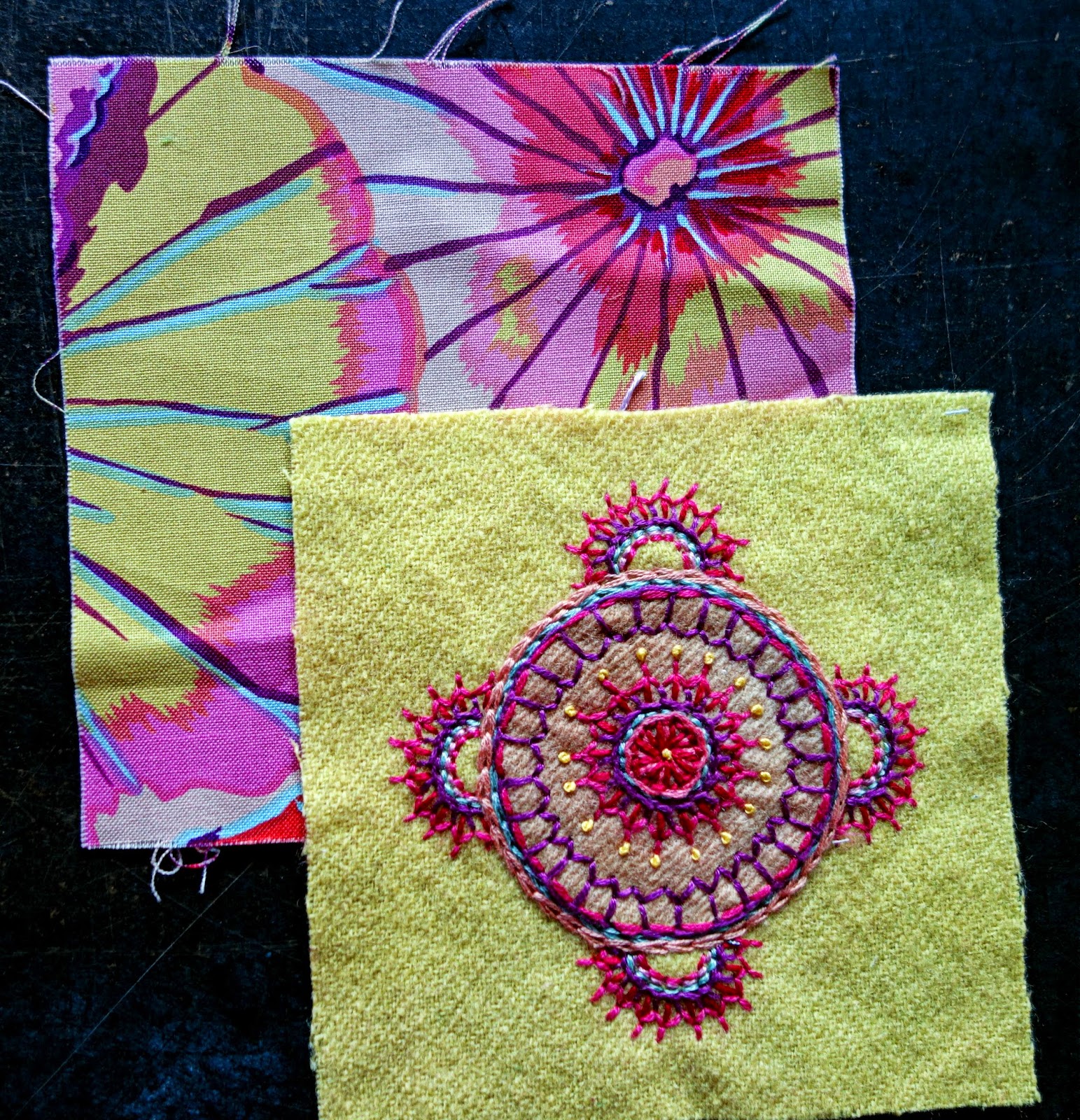 I can hardly believe summer is starting to wind down but the signs are undeniable. The crickets are chirping and the locusts are buzzing. Potato vines are drying up and remind me it's time to harvest garlic. A murmuration of starlings has been hanging out in the trees in our back yard. And the blue jays are singing their pretty song instead of squawking. I love the way it all sounds and looks and feels.

Moon-making is a monthly full moon ritual for me -- this year I am stitching mandalas with home-dyed wool -- 13 moondalas. July's moondala is a flower-bouquet-dyed moon on a dandelion-dyed background. Inspiration for thread colors was all around but that scrap of cotton stayed close by whenever I stitched.

Dyeing with flower bouquets has been a nice way to extend their enjoyment -- those red, pink, yellow and white rose dye-bundles will help me remember the occasion and the people, as well.

Today is a waxing crescent moonday in Virgo. As the moon grows fuller each night, so too do our wishes and visions grow. Now at the beginning is when they sprout tiny roots and begin to stretch toward the light. Things usually need a little extra care and attention at this point.

And whispering "grow, grow" can only help, right? xx 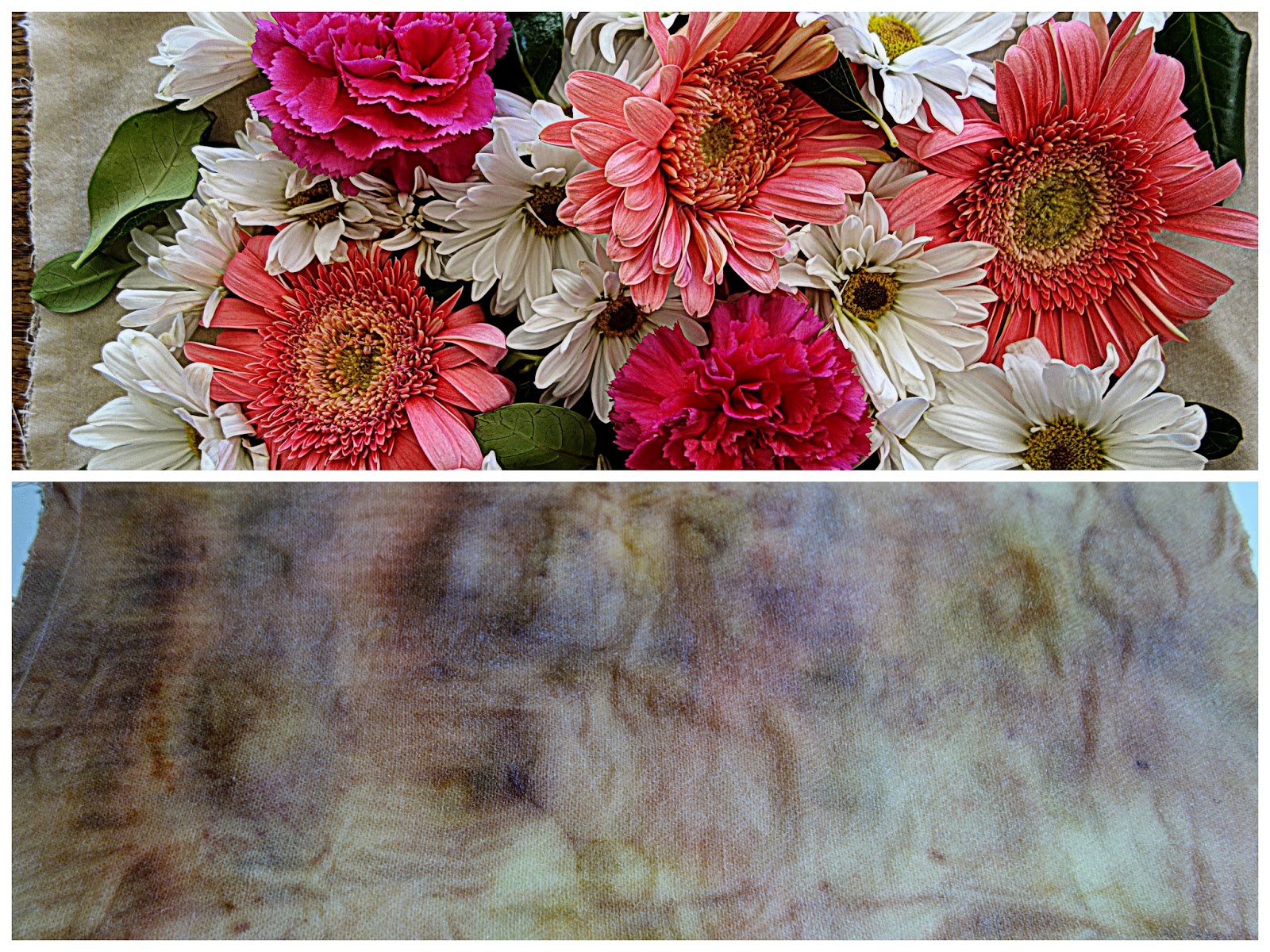 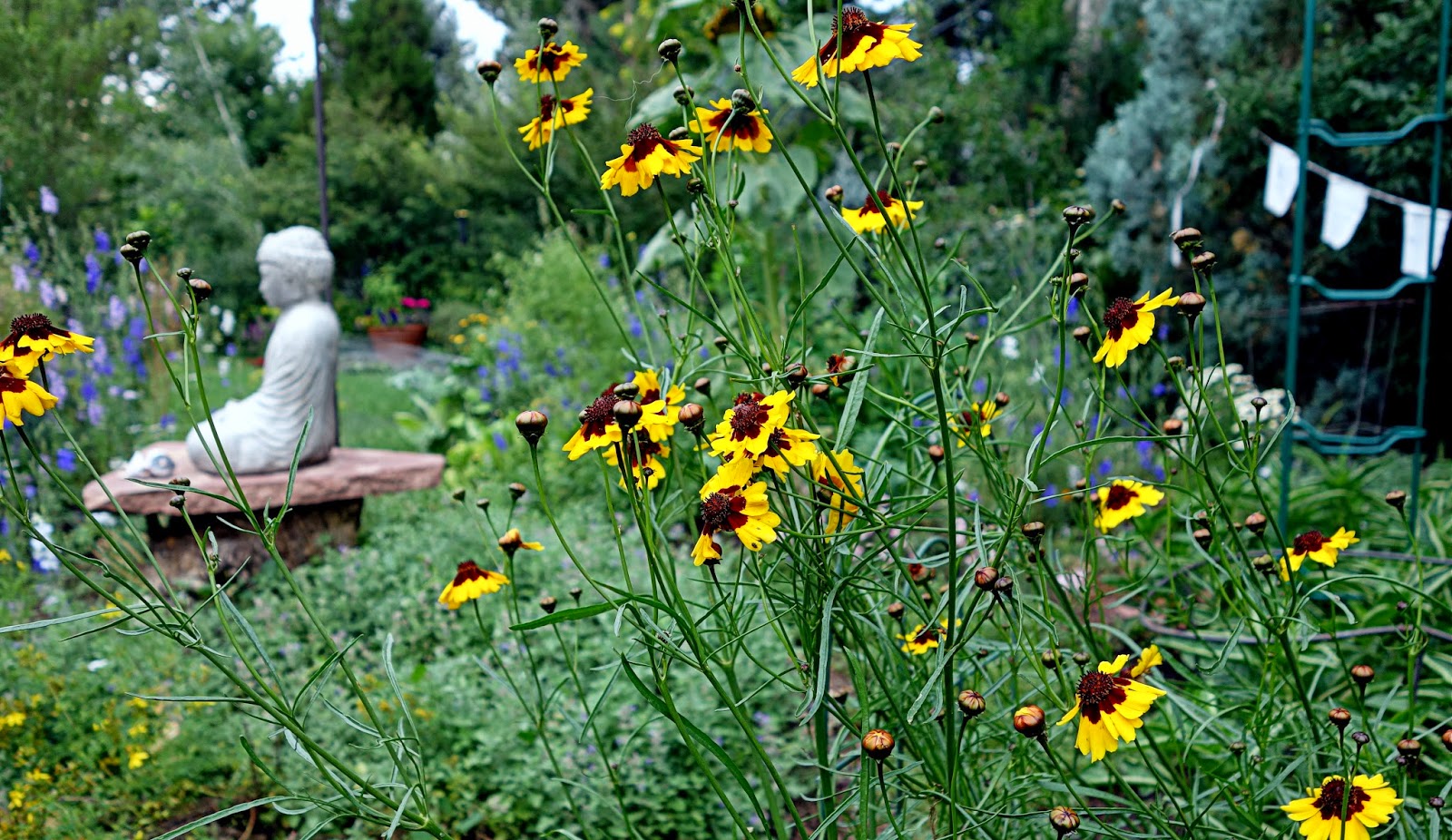 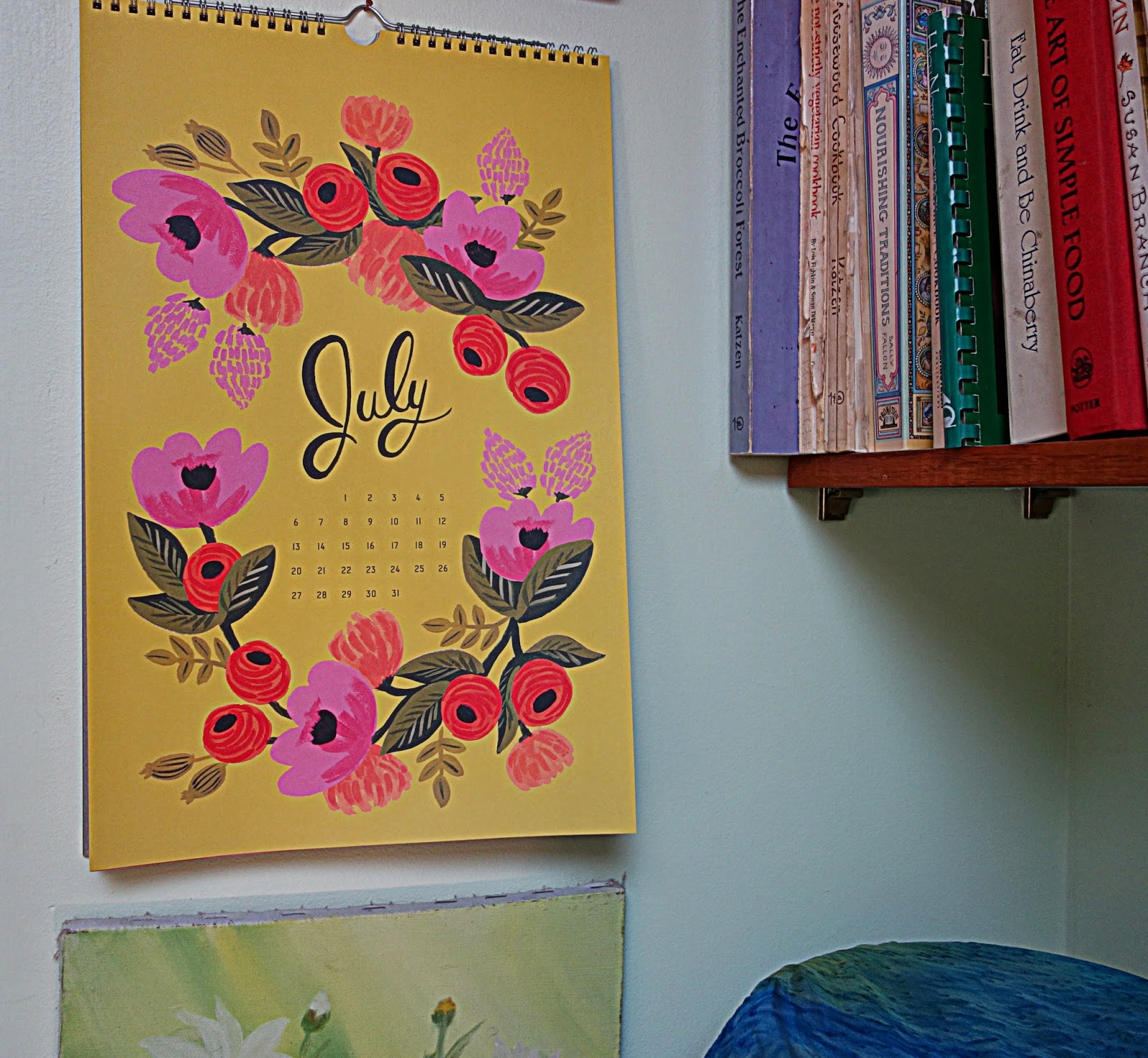 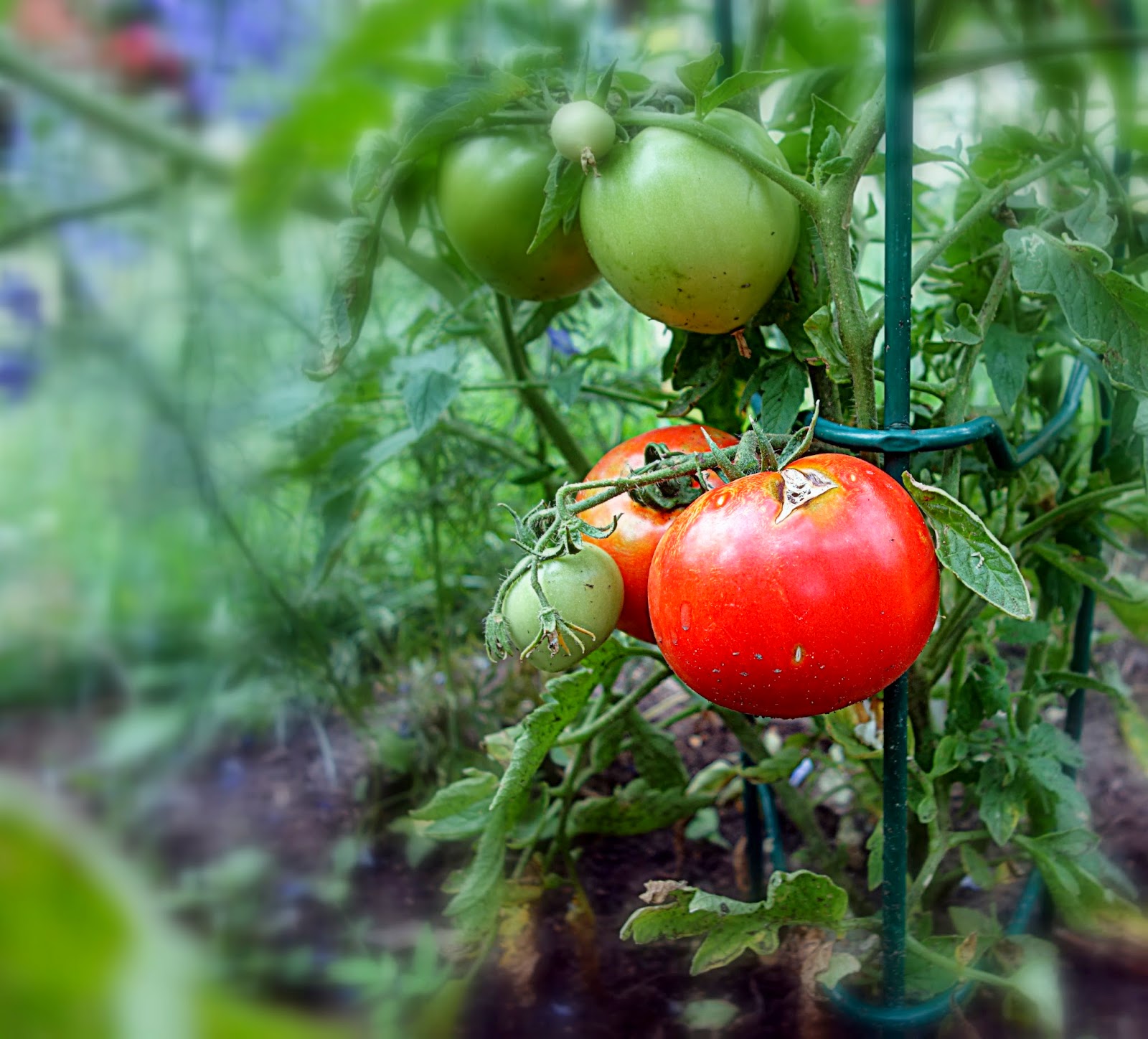 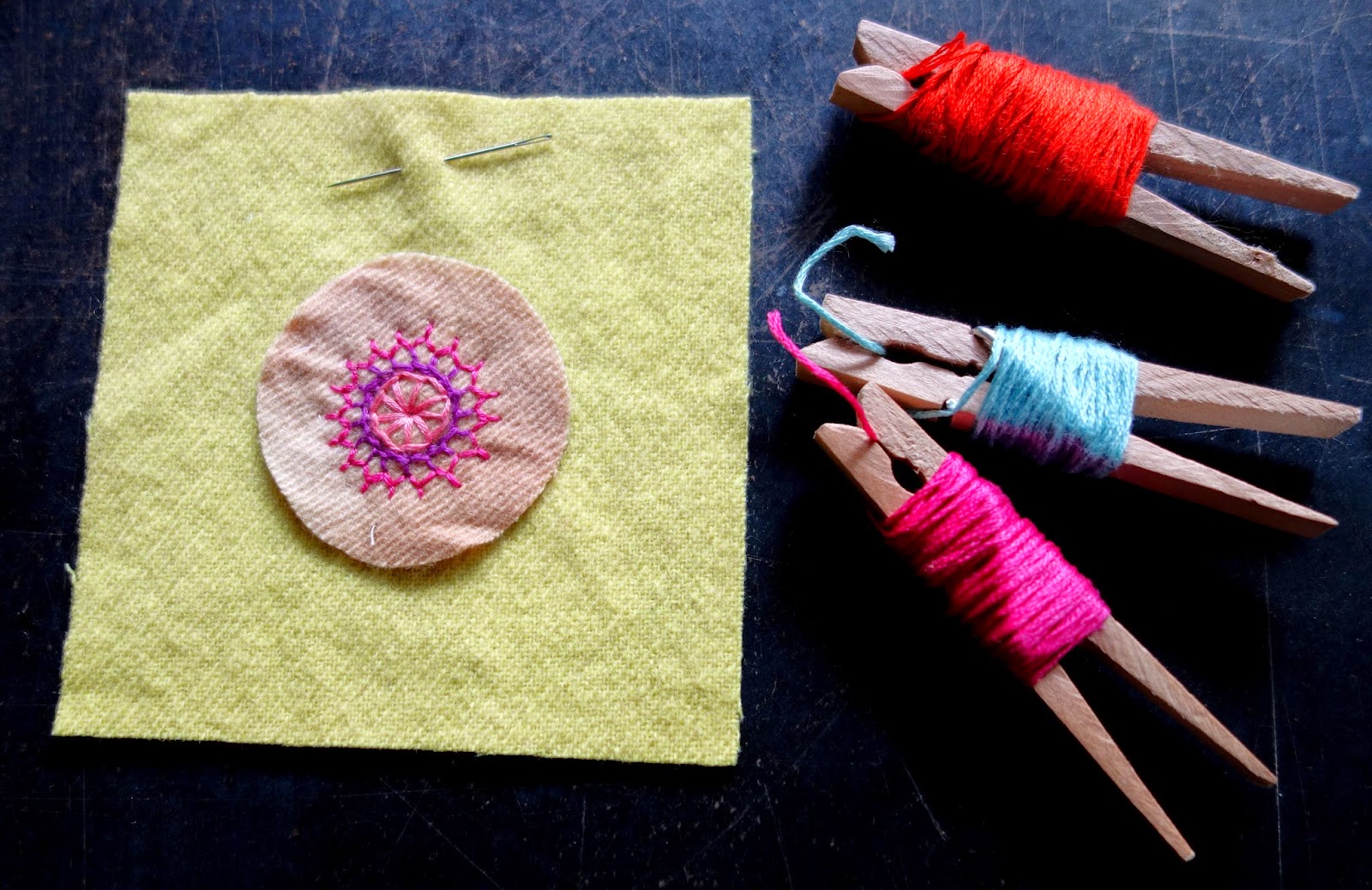 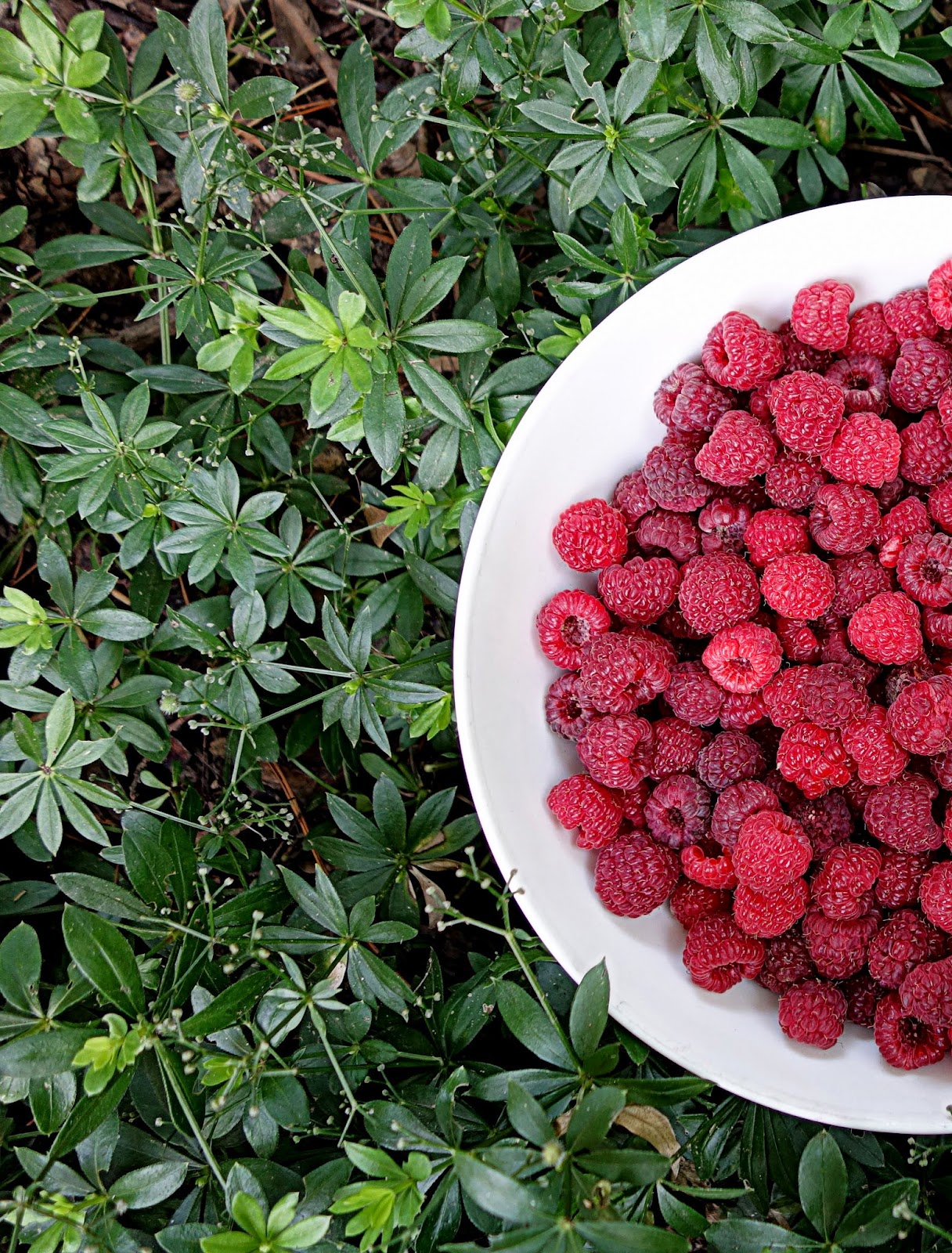 The moon on July's moondala is from a flower bouquet dye-bundle -- and the background is dandelion-dyed wool. I seem to be influenced by the calendar colors again, this has happened a few times before.

The dark-centered yellow flowers are dyer's coreopsis, Coreopsis tinctoria -- they're about 3' tall and ready to go to town as you can see. Hoping they self-seed, would love them to go wild.

Today is a waning crescent moonday in Gemini. In true Gemini style, many things are happening very fast -- there's so much going on in the world that I don't understand, I have no words. But here in this place where I live, I turn to the garden with these early harvests and to the dye-pot with its own special harvest, that of color. I feel myself finally sinking into summer and notice how the garden grows on its own with very little help from me. I basically water and weed and watch.  The garden reminds me that if any of my own plans or intentions haven't taken root to grow and thrive, they aren't likely to come to fruition either. Now is a good time for that kind of assessment. I pretty much know when a plant isn't going to make it or when I'm going against the grain on something but sometimes it takes a while to give up. To "give up" can actually be a good thing -- it's putting stuff into the cosmic mix to be changed, like composting.

And we all know the magic of good compost. xx 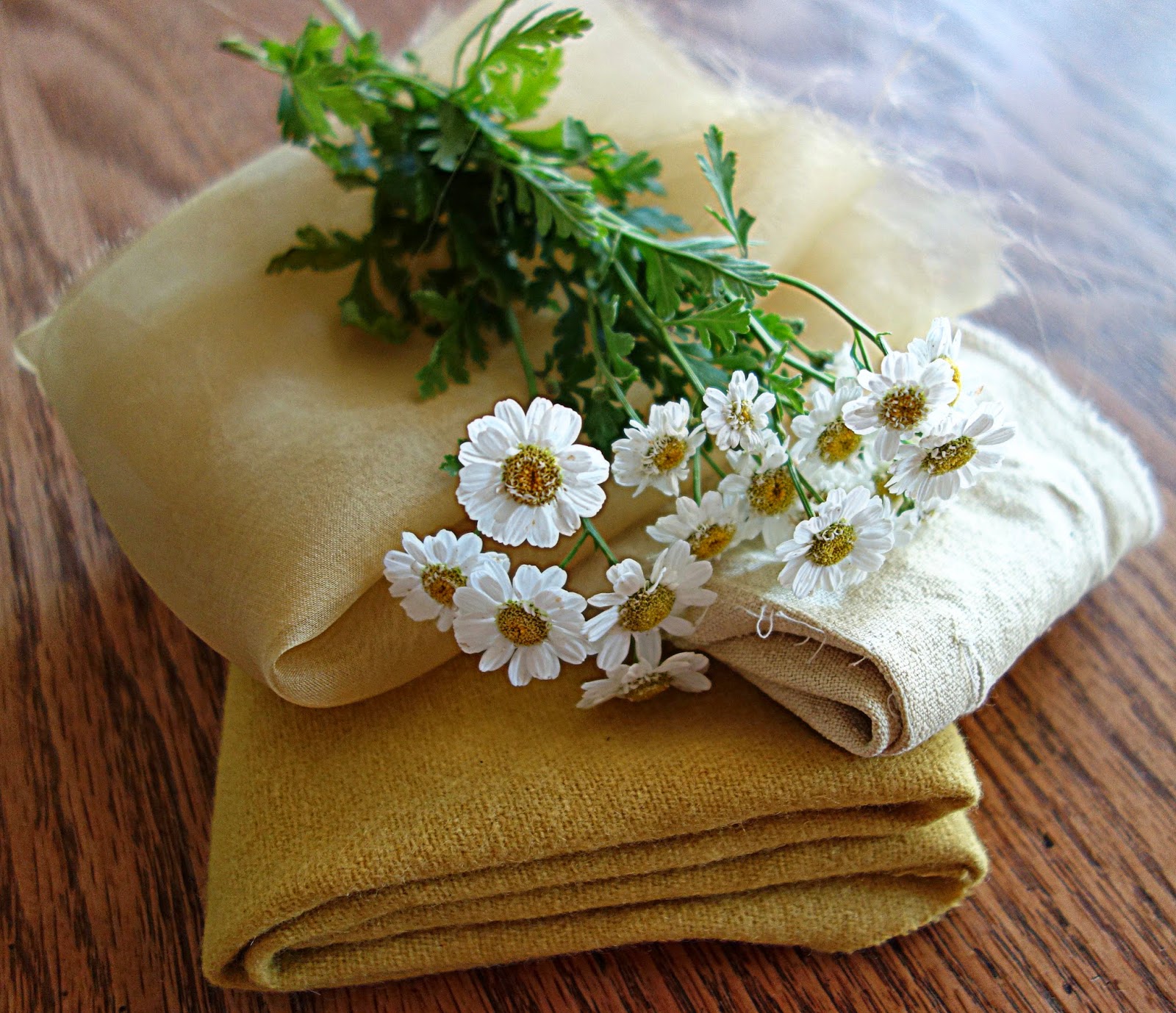 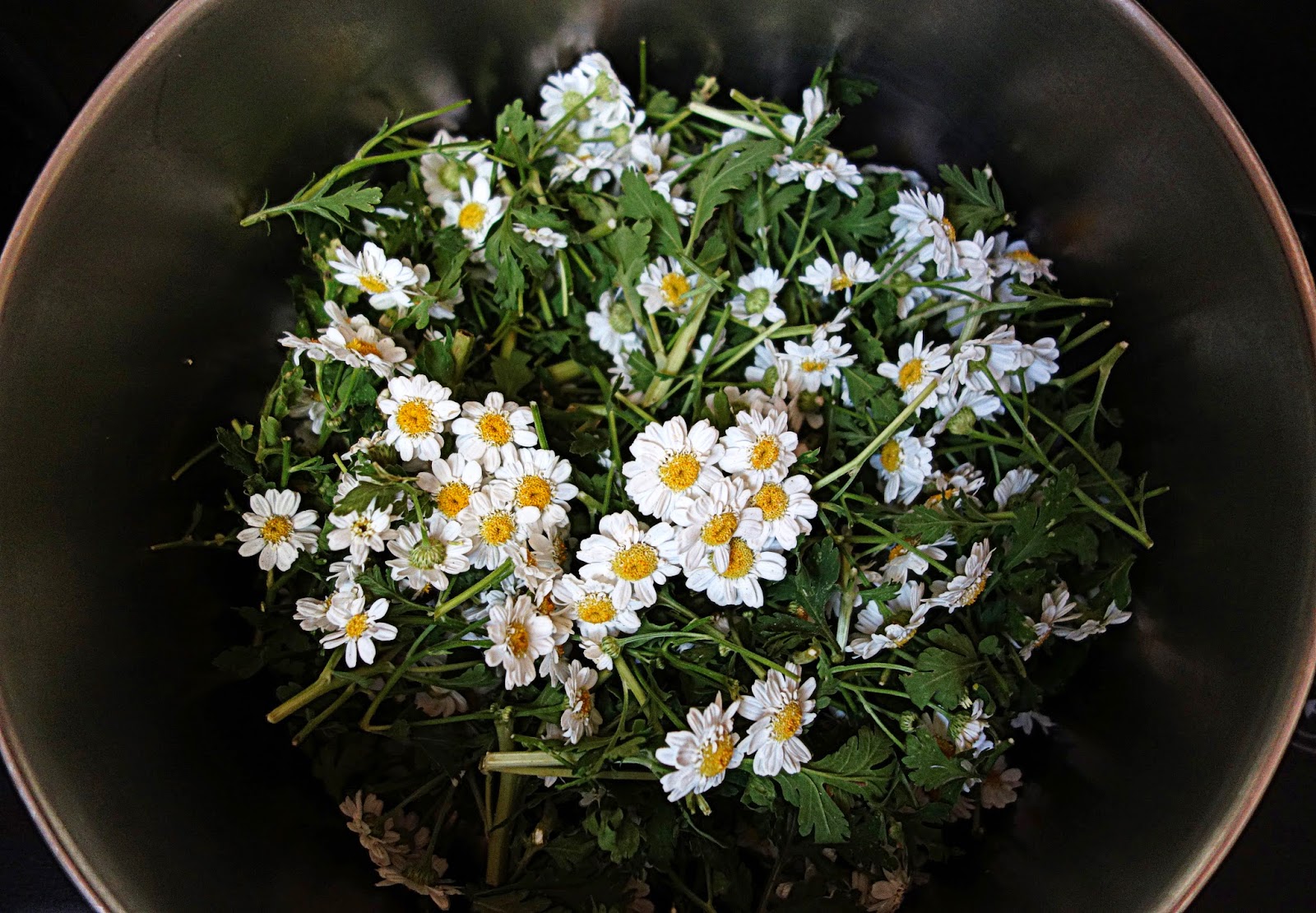 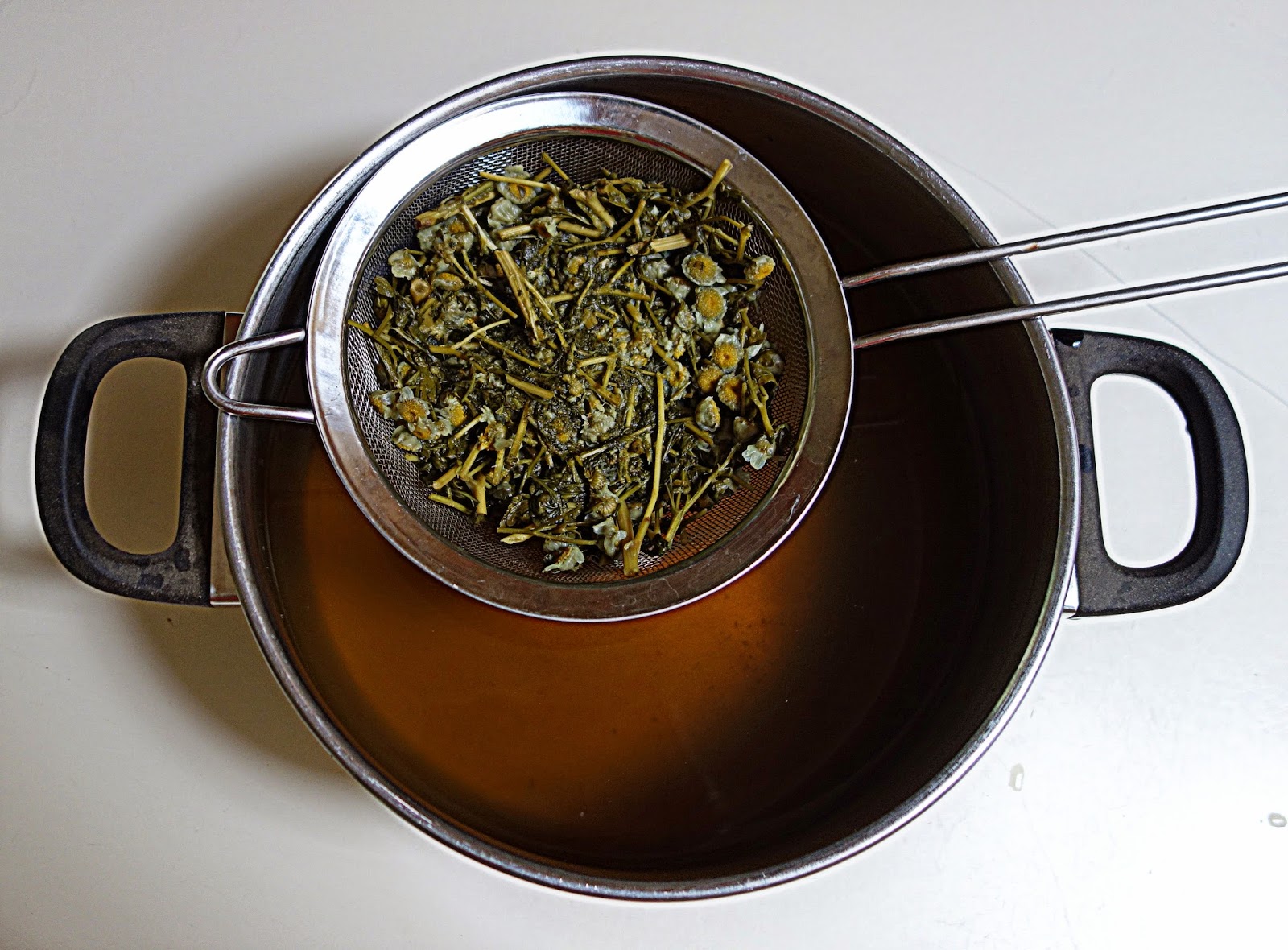 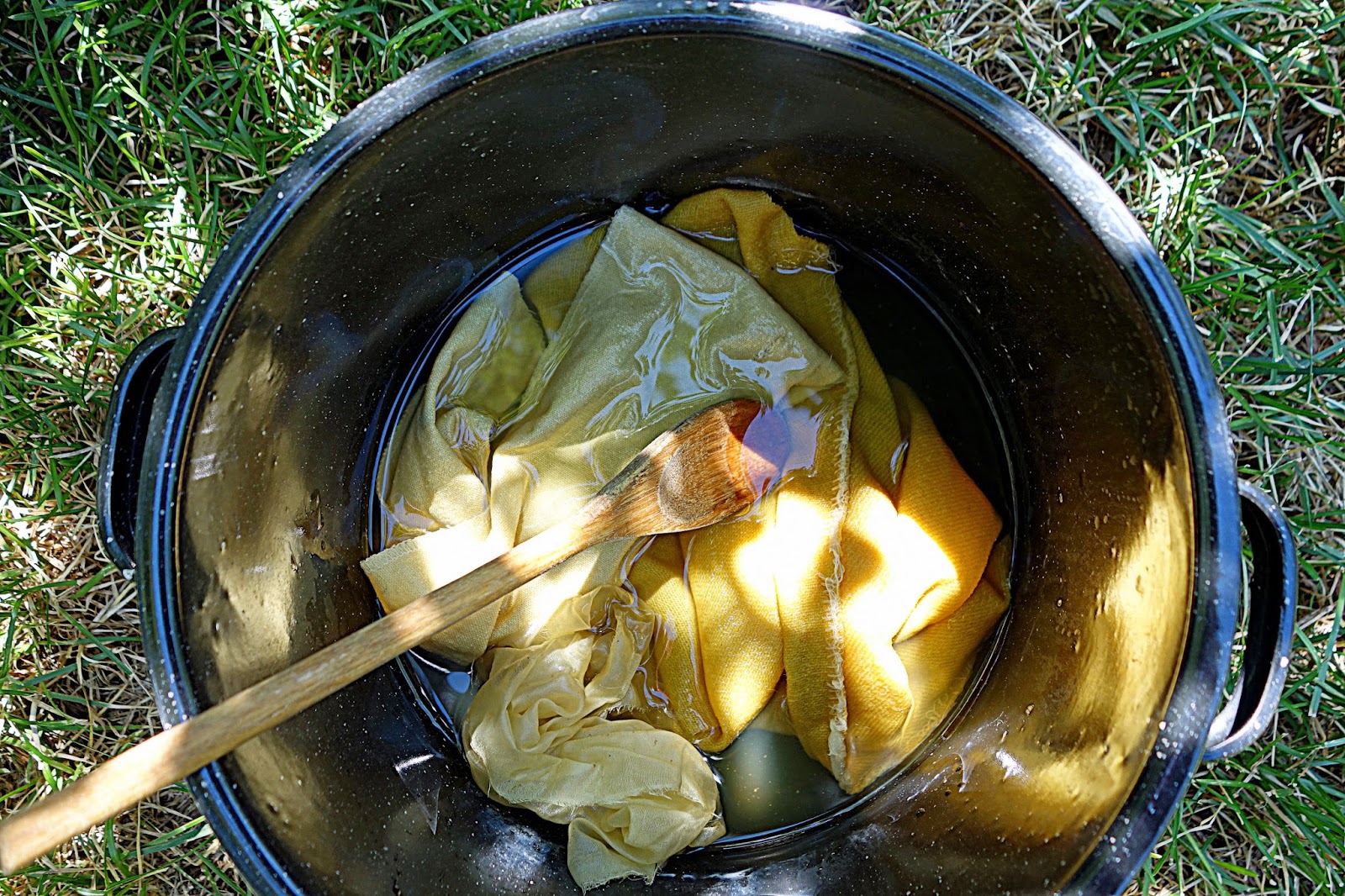 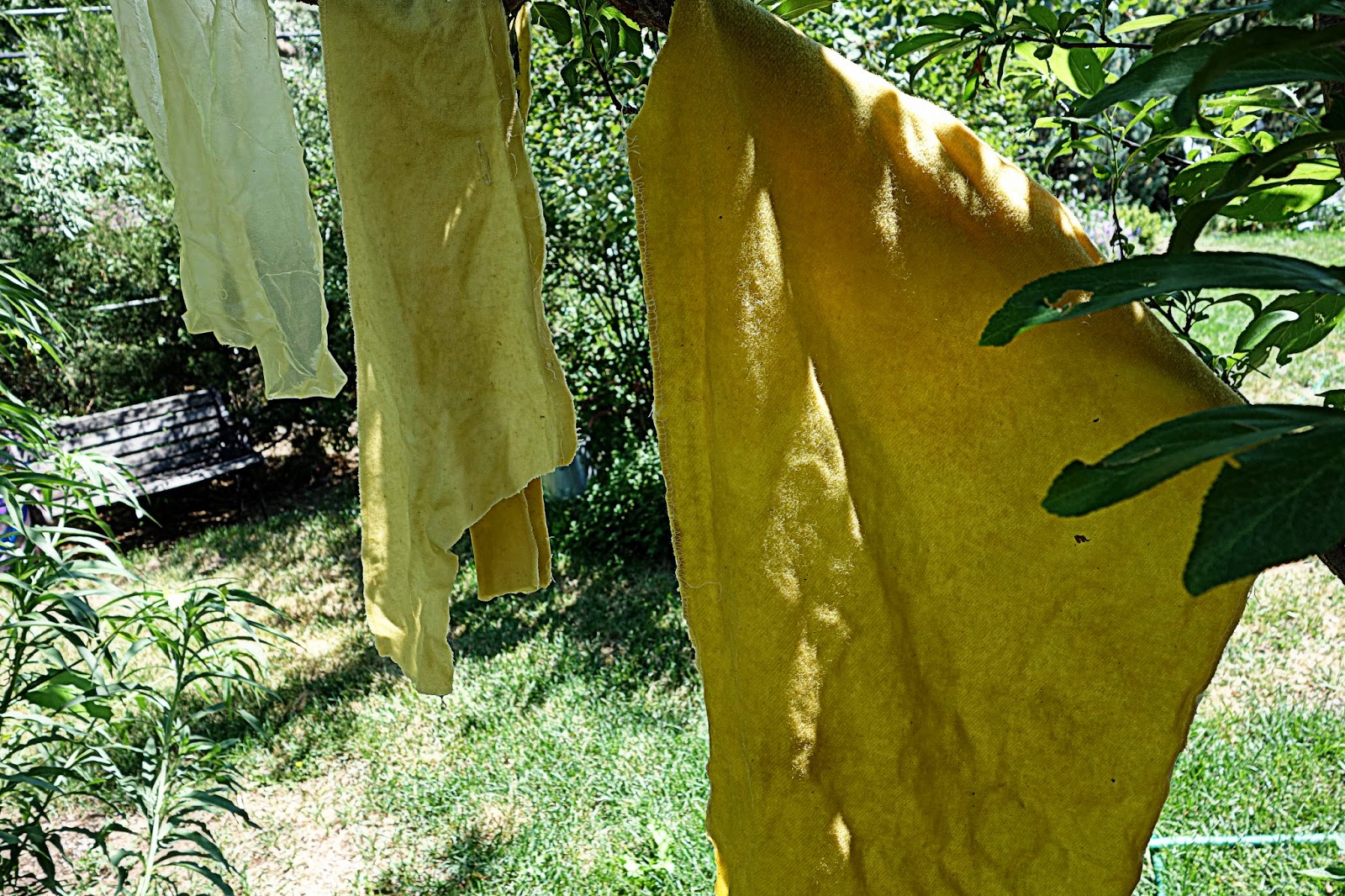 Three whites -- wool, silk shantung and silk organza -- emerged golden-yellow from the feverfew dye-pot. Tanacetum parthenium, what an easy plant to work with -- flowers, stems and leaves simmered for an hour, left to sit overnight before straining. The same process repeated with the cloth. (The wool had been premordanted with alum, but not the silks.)

We're already well-acquainted -- but still I sat in the middle of a patch of feverfew for a long time last week because I want to know the plants that grow with and around me on a deeper level. Taking a few moments to first clear my mind to better connect with feverfew, I buried my face in blossoms and breathed deeply. I tasted. After a while I recalled the first time I saw these daisy-like blossoms in a friend's garden, the strength of my attraction to them, and how that friend gave me seeds from those very plants. That was the beginning. And I remembered, too, the first time I realized that feverfew lights up the darkness and that she is a moon lover as well as a sun lover.

Today is a waning moonday in Aquarius, moving into Pisces in just a few hours. Was wondering why I wasn't falling asleep right away a few nights ago but then thought, yes, the moon is full. Of course. That's what happens.

Wishing you many good friends in your garden. 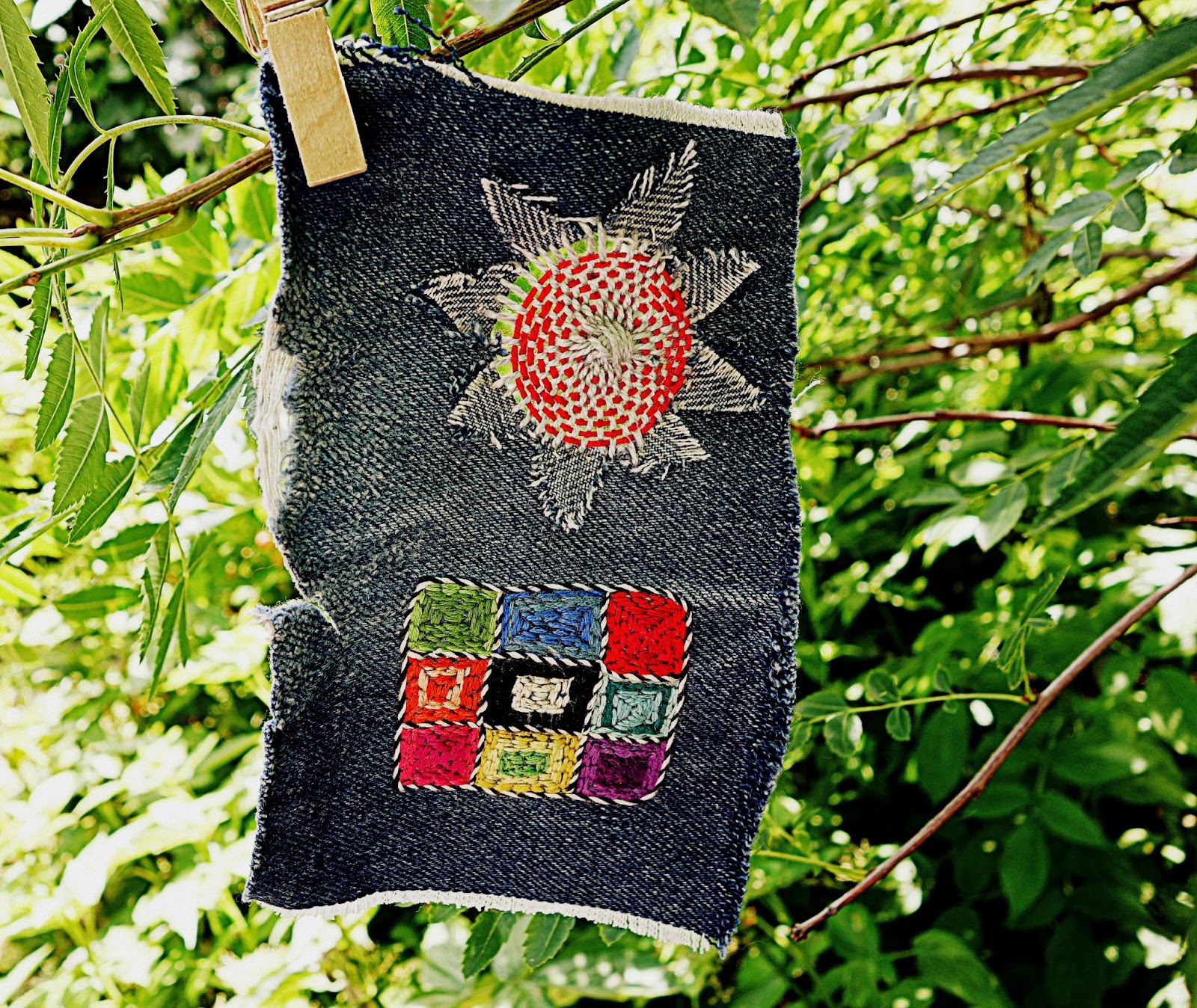 A tiny red sun(flower) patch shining down on the 9-patch. Woven and inspired by Jude's Considering Weave class. This cloth could possibly turn into a sampler of some sort. It's from boys' jeans that needed a patch way back when but the mother never got to it. Now it is a patch because the mother has more time now.

Thanks for visiting and happy full-moon weekending. I'll be thinking about July's moondala. xo

Email ThisBlogThis!Share to TwitterShare to FacebookShare to Pinterest
Labels: sewing 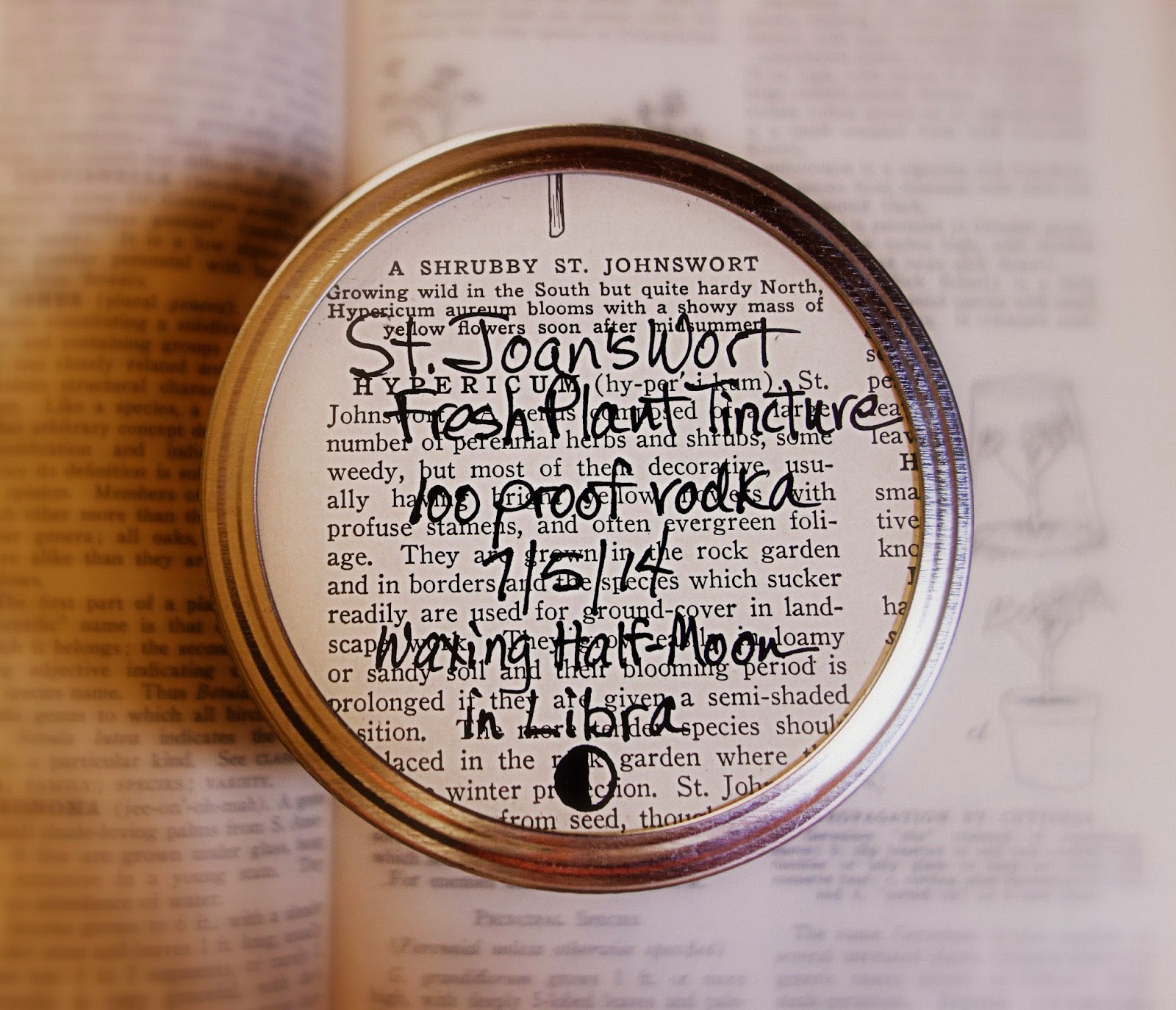 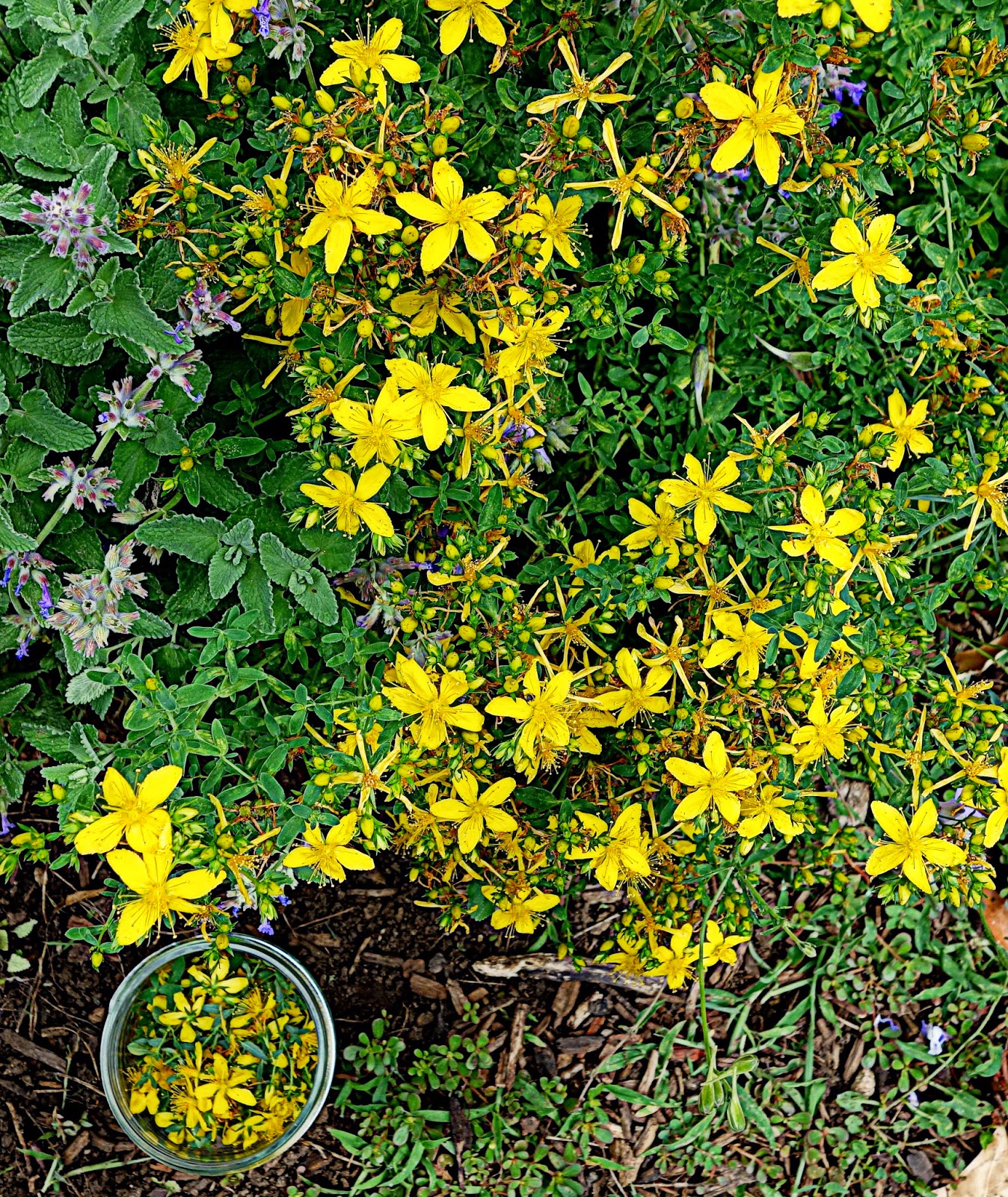 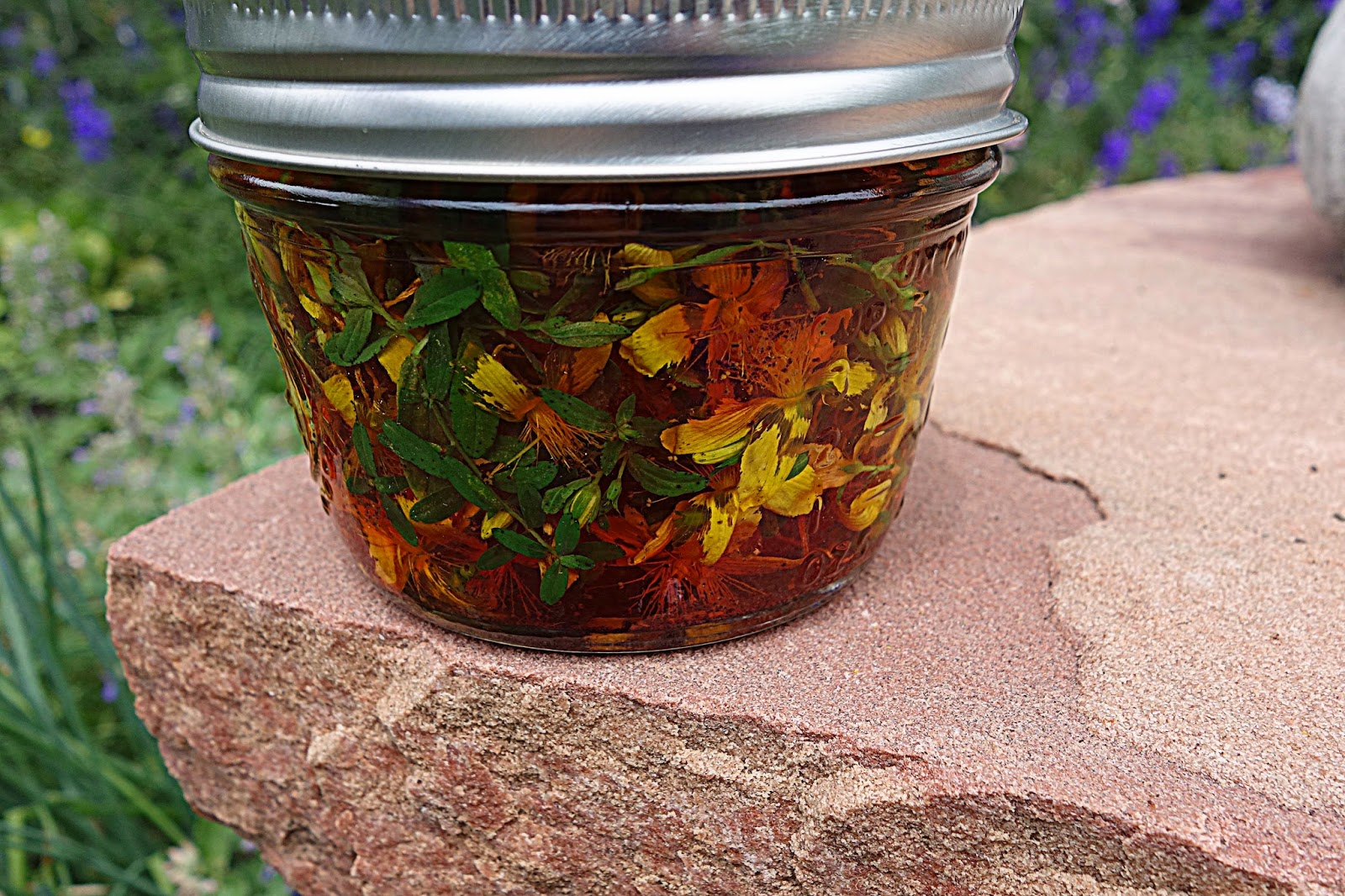 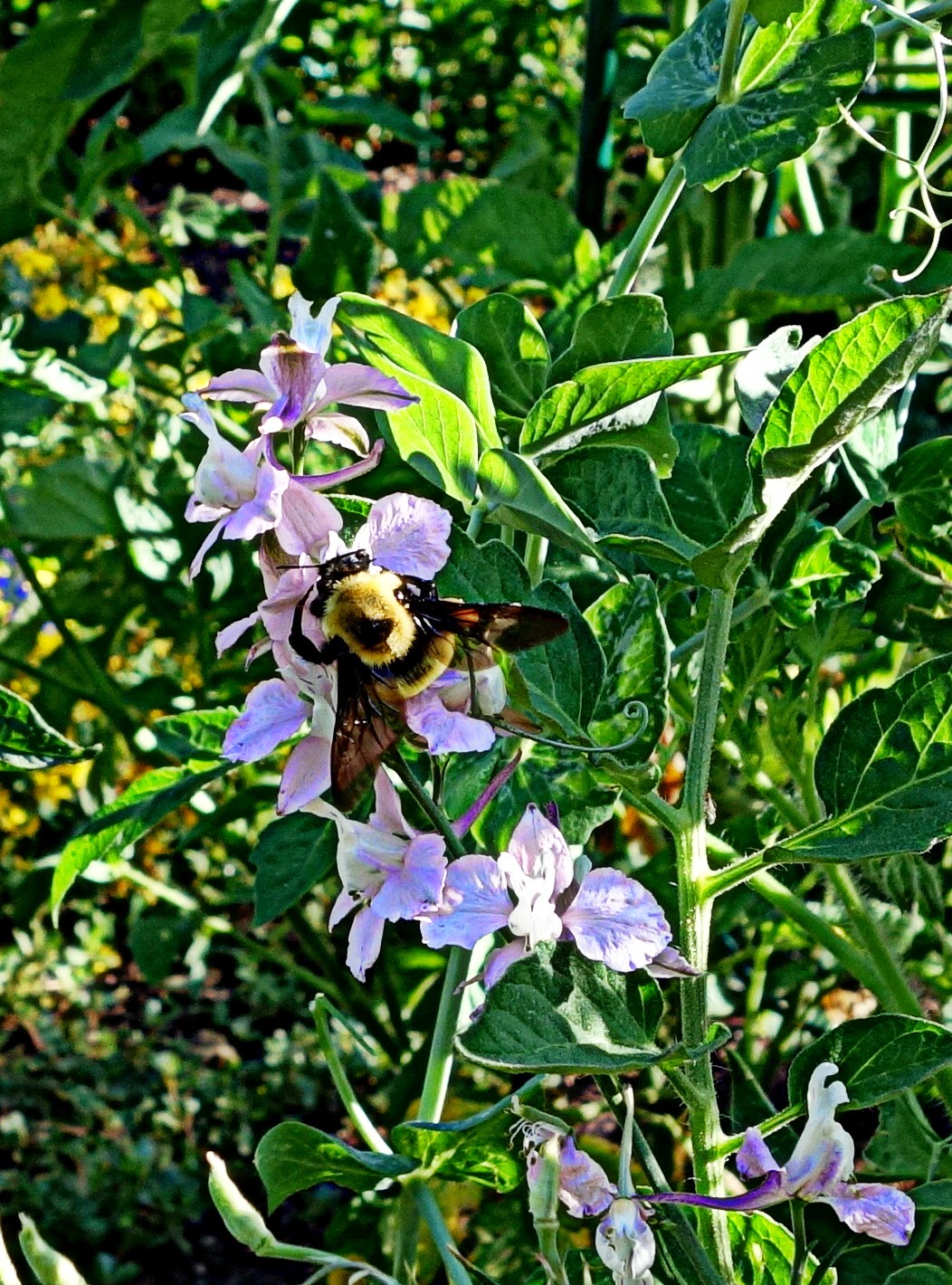 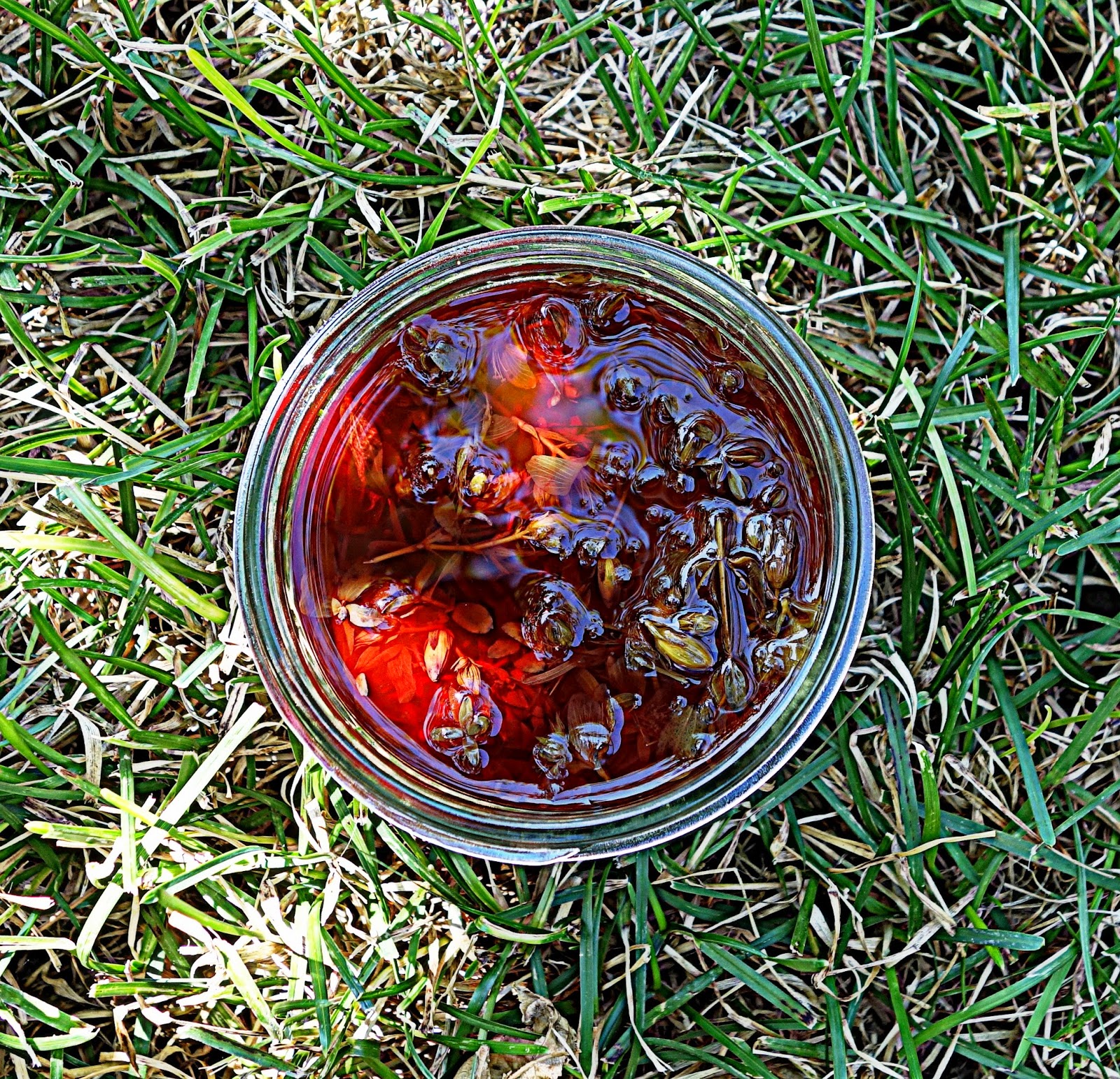 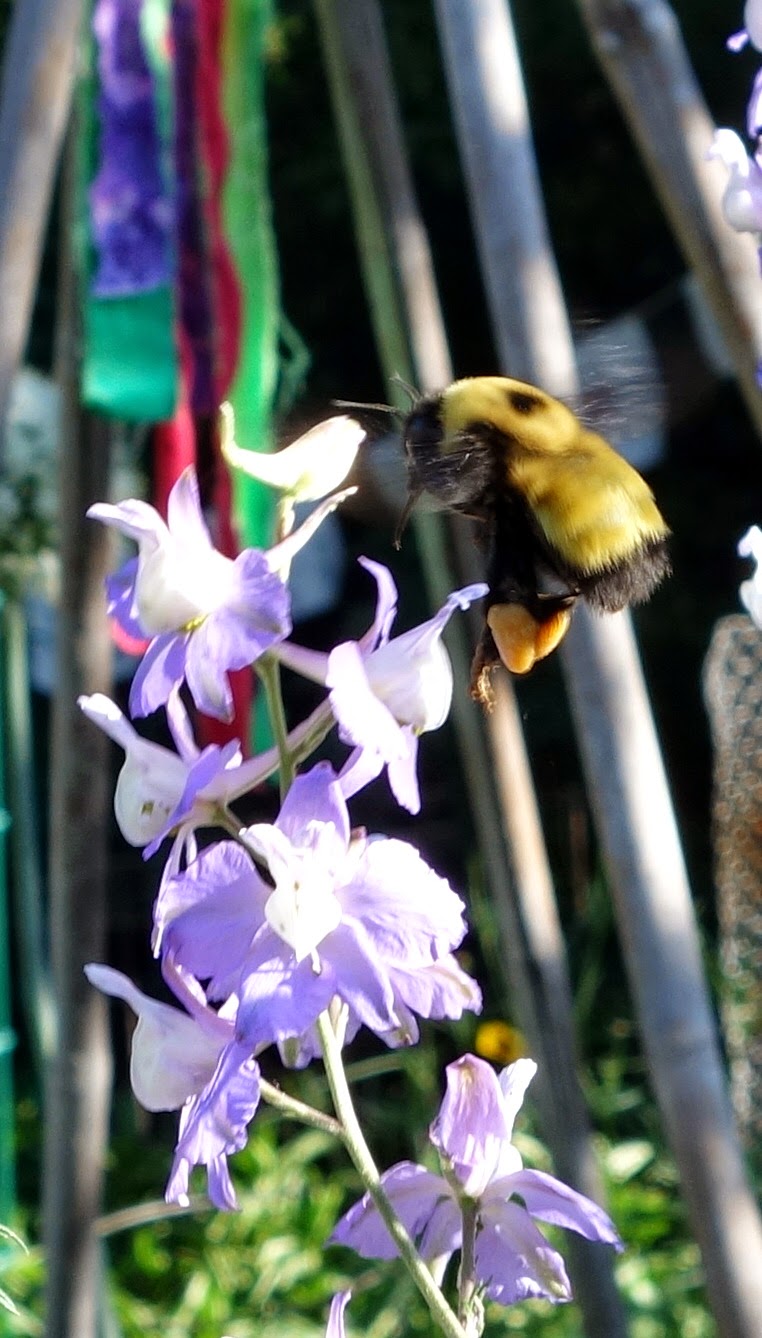 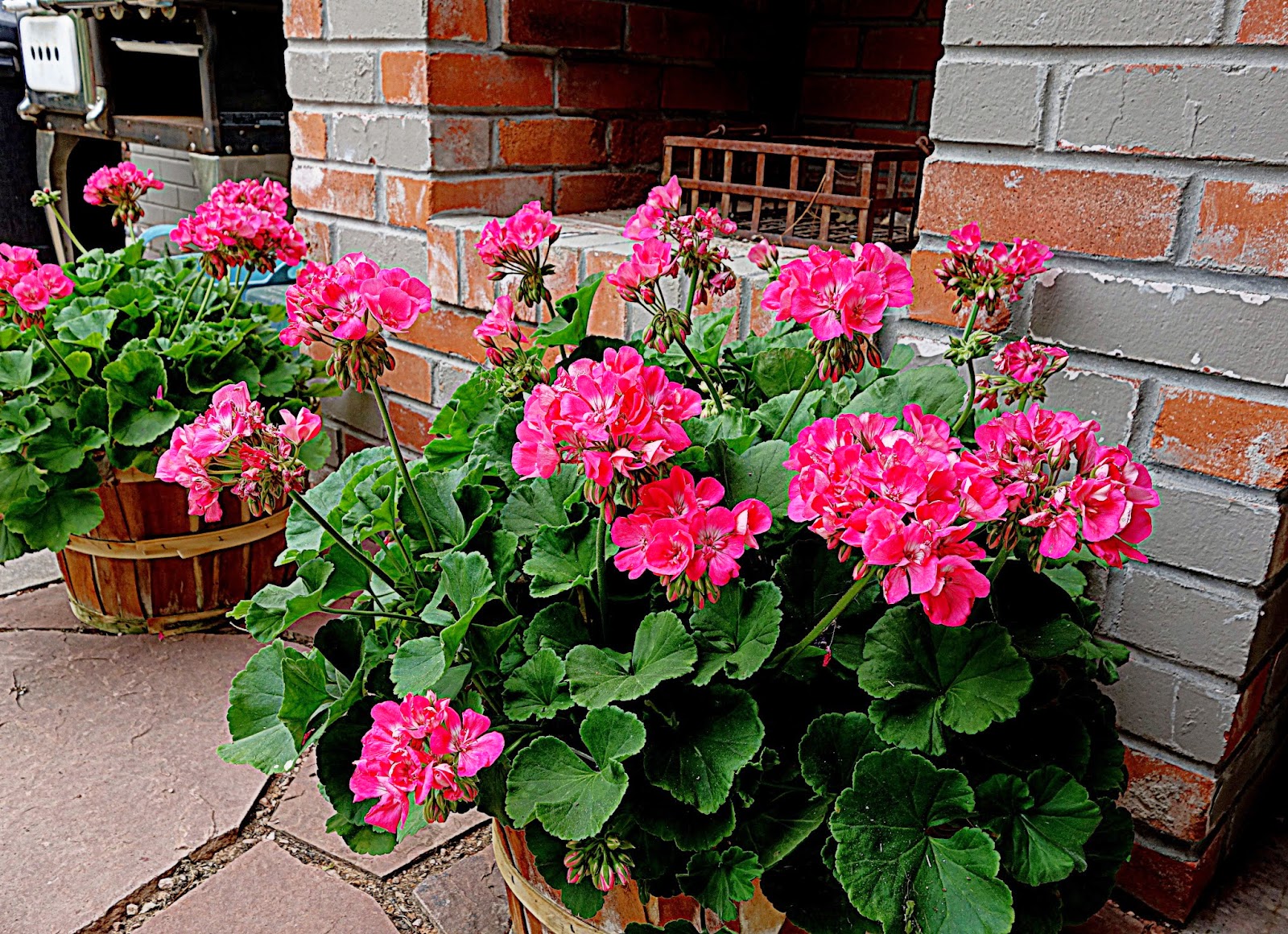 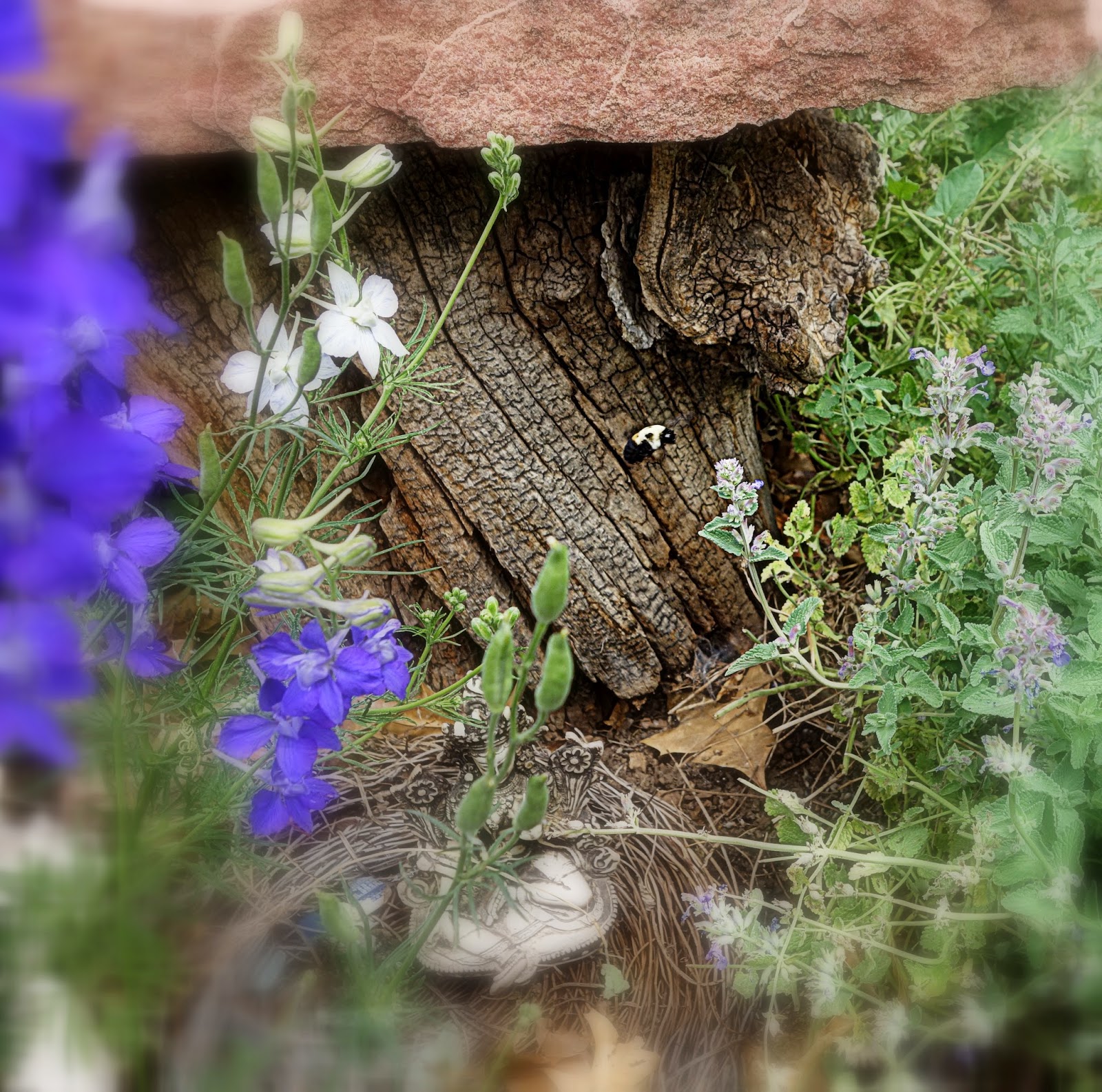 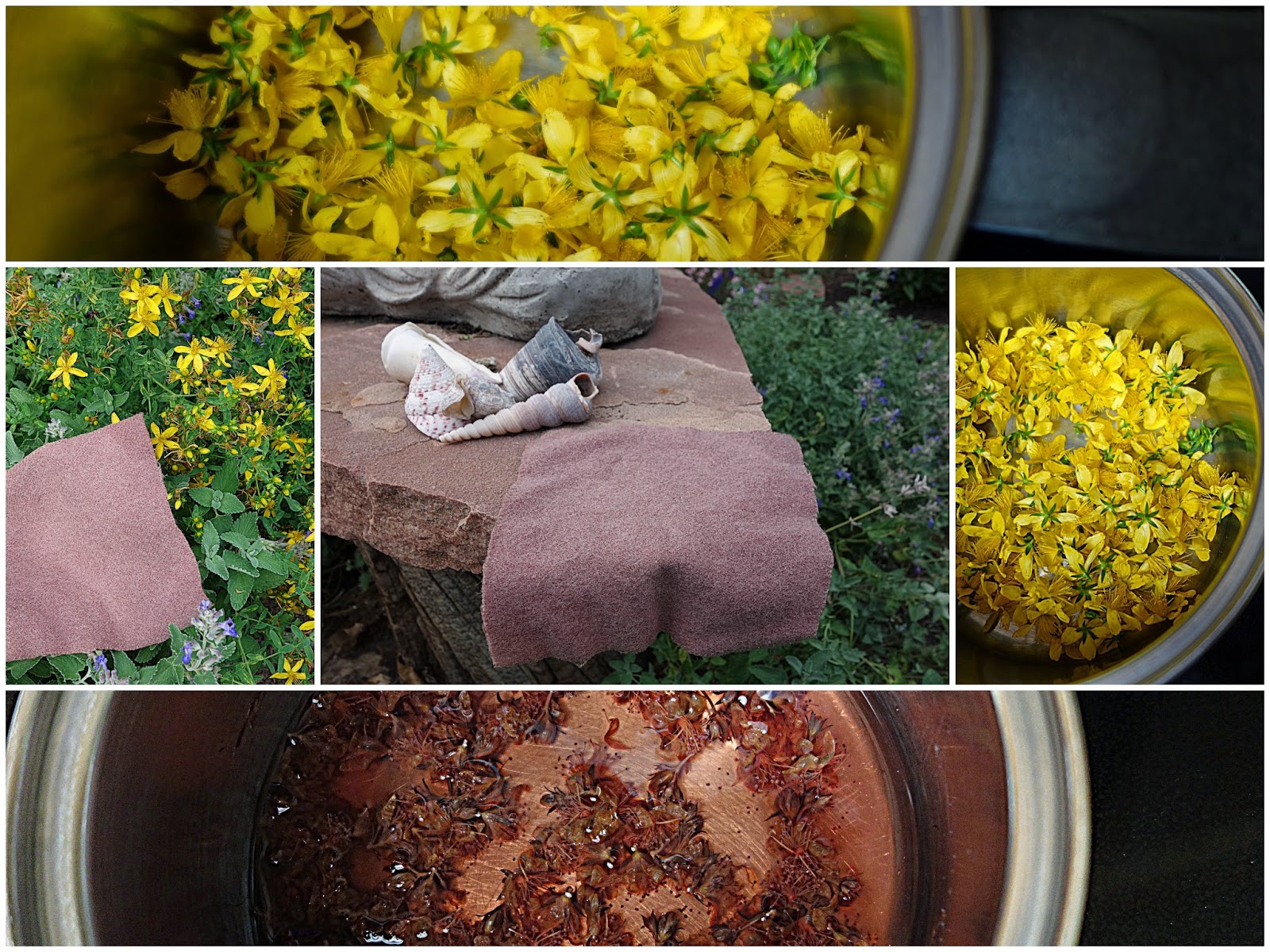 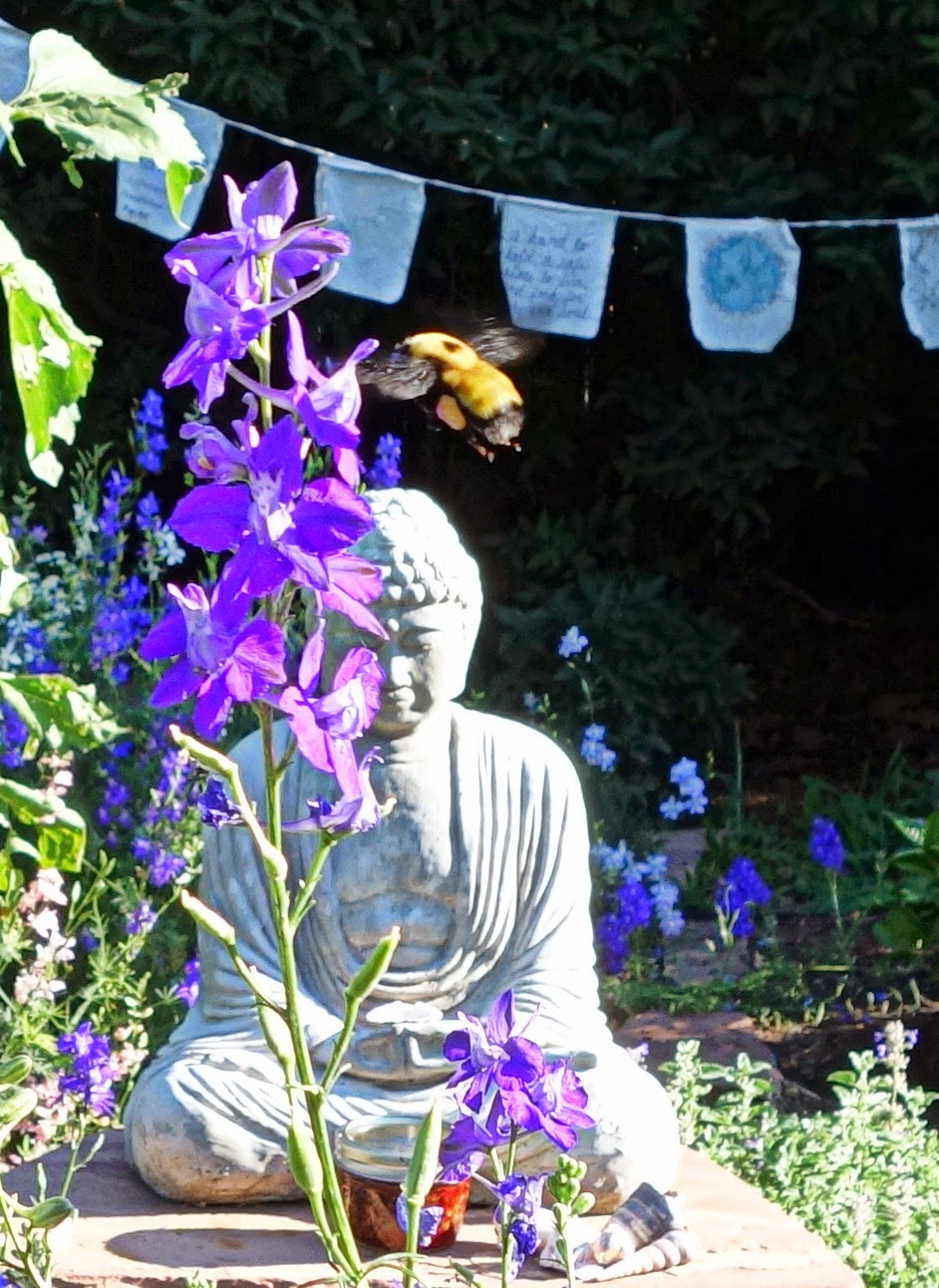 Honeybees, bumblebees, wasps and other tiny winged-creatures are drawn to her and St. Joan's wort calls to me as well, she always does this time of year. A connection with the plant spirits in the garden is important to me so at the very least, I try to spend a few moments with a plant before I request and harvest any parts. Sometimes the time runs longer and almost always it does with St. Joan's Wort . . . after walking a circle in the Buddha garden to acknowledge the four directions, I settled in cross-legged on the ground just inches from her golden flowers. I breathed slowly and deeply, the pollinators were mesmerizing, and after a while I tasted a leaf and then a flower. When the connection felt right, I picked enough flowers to fill a small jar, then I filled the jar again with vodka. The jar was capped and left with Buddha for one complete turn of the earth -- my medicine-making ritual complete on a waxing half-moon in Libra, the sign of balance.

A healer of the skin among other things, and specifically burns, St. Joan's wort is also known as St. John's wort, Hypericum perforatum -- but Joan knows more about burns than John according to my herbal tradition, thus the name. Normally, I make an oil for salves with the flowers, but this year I decided on an alcohol tincture to be used almost homeopathically -- by the drop rather than the dropperful. I am anxious to begin to use tinctures in a more energetic way, rather than by volume.

There have been so many bumblebees this year -- and while sitting with the St. Joan's wort I saw they were flying in and out of the base of Buddha's tree stump. A bumblebee nest! Look at the one's pollen baskets, she's just gorgeous.

You can see in the photo how St. Joan's wort flowers turn the vodka red almost immediately. The same goes for the dye-pot. To test it out and not wanting to use too many more flowers, I picked a quarter ounce for the dye-pot. After a simmer, the flowers were strained out and a tiny piece of unmordanted wool went in for a second short simmer and left in the dye-pot for a time. Another turn of the earth and I have a nice little mauve cloth for a future moondala. A while back I experimented with the flowers in a silk bundle, a totally different outcome.

It rained and hailed again last night -- we thought it was the loudest storm in a long time and the dogs barked and howled on top of it all. With all that moisture there is so much going on in the garden today, I can't stay inside a minute longer. Wishing you a wonderful week -- full moon on Saturday!