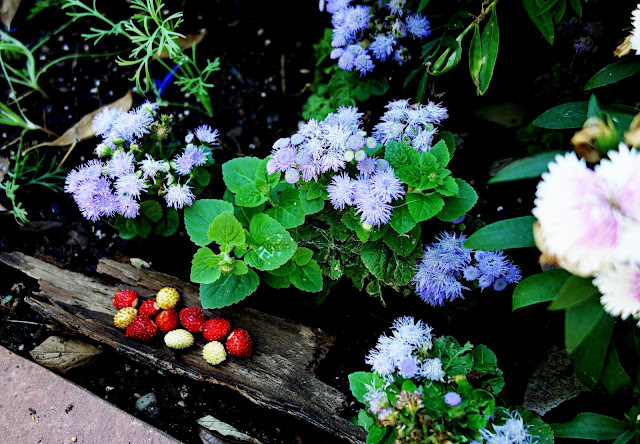 A token Midsummer's Day offering for the wildlife who visit here -- red and white alpine strawberries on a bark trencher, dropped off by our maple tree during the last rainstorm. The white berries are sweet but not quite equal to the red. 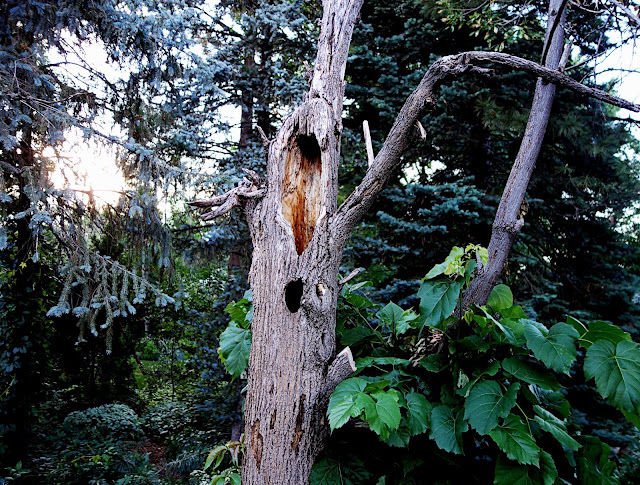 On the other side of the fence between a neighbor and us. The more aged and weathered, the more beautiful this tree becomes. 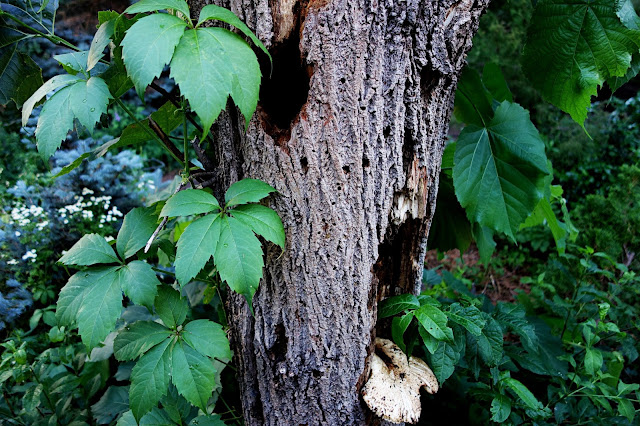 One might assume the tree is dead, but to the contrary, she is teaming with life inside and outside. 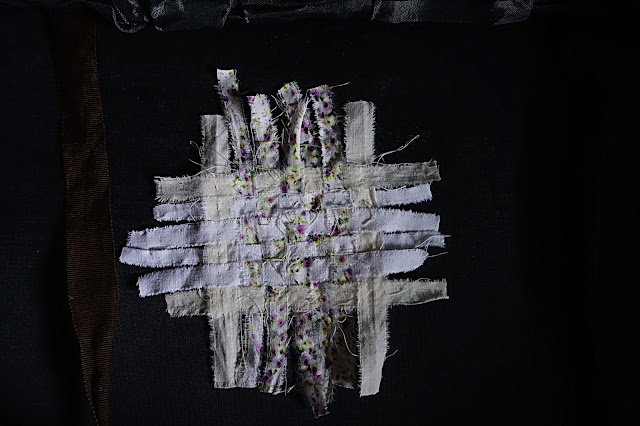 The beginning of a woven midsummer's day cloth, about 4" square. 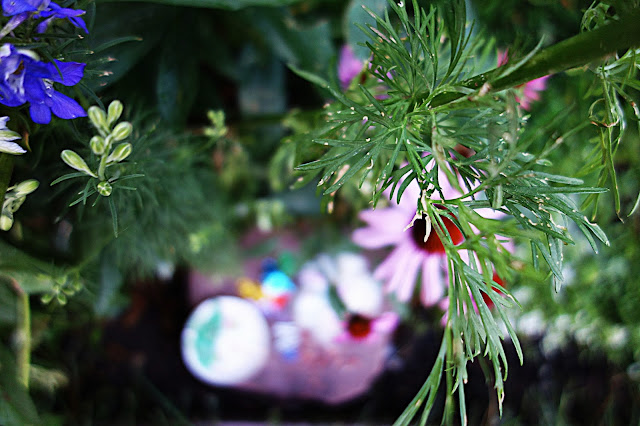 A Midsummer's Eve offering for the spirits -- things I would like if I was a faery...cottonwood fluff, strips of plant-dyed cloth, shiny foil...actually the same things I like as a human! 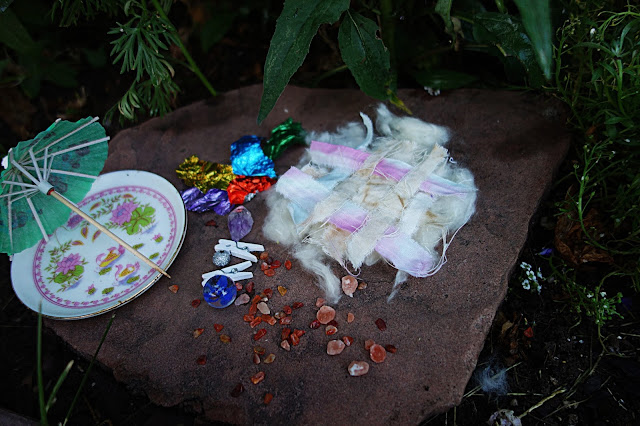 When the dogs and I walked into the park near the creek earlier today, hundreds of dragonflies greeted us. Magic is afoot. Happy Midsummer's Day to you. xx 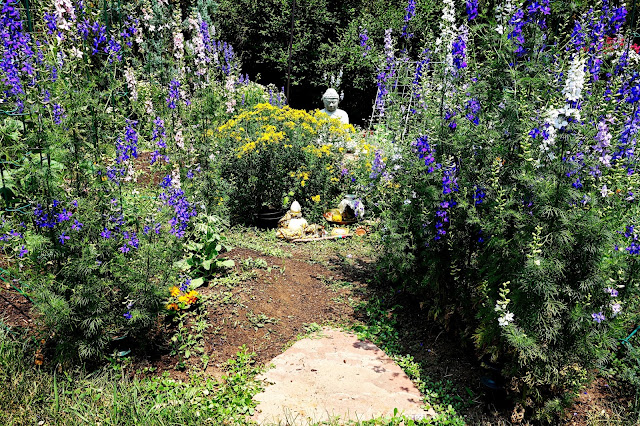 I heard the first cricket of the summer on Solstice Eve and she's been chirping ever since. We always wonder if things like this are happening earlier or later than normal so I try to write them down in a little nature daybook -- under June 19 I'll enter "2016: first cricket-song".  Also, the chickadees fledged and amazingly, house wrens took over their house the next day so that'll go in the book too. I'm glad birds can time-share like that.

Starting with lighting a fire for s'mores with my family on Solstice Eve, I've been enjoying simple rituals each day since and will continue through Midsummer's Day. I'm calling these six days Solitary Solstice as I'm circling on my own for the first time in 25 years. If you have ever wanted to create a spirit ritual but felt you needed to be in a group of people or a special place for it to be successful or meaningful, you are mistaken. I am going to be exploring ways to deepen my solitary practice in the days and weeks ahead. The Green Woman is the connecting energy between plants and humans -- and she is definitely here. Yesterday she called me to the wild(er) side of our back yard, directly to the patches of lemon balm, Melissa officinalis. I sat on the ground, sank into the green, hummed, sang and pinched enough lemon balm tops to fill a quart jar. I filled the jar again with cold water and topped it with cheesecloth and a screw-on metal ring. I placed it on the altar in the Buddha garden to be infused with the energies of both the full sun and the full moon. Lemon balm water melds the elements of moon (water) and sun (fire) to enhance meditation and is one of my favorite summer rites. The Green Woman is a taskmaster -- she also reminded me that the motherwort flowers are ready for tincturing soon. And the perennials in pots on the front porch needed to be given homes immediately, among other things.

Later I remembered my unfinished moon cloth with stones and a lemon balm leaf and began to rework/simplify it. (The Green Woman needed a rest, I know I did.) I'm thinking it might make a nice patch on a pillow cover or a bag. 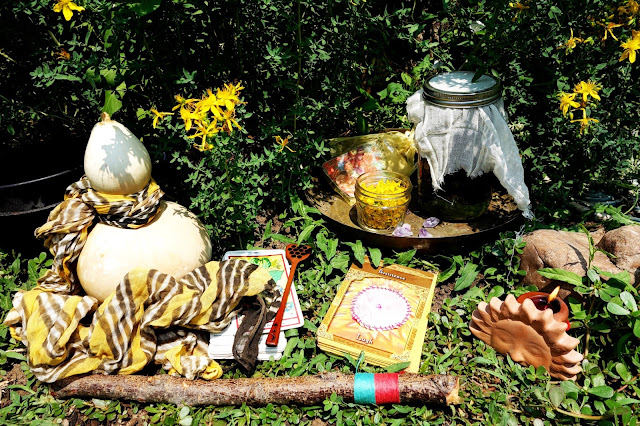 Today she guided me to the St. Joan's wort, Hypericum perforatum, in the Buddha garden -- a circular area with entrance paths at the four directions and the Buddha altar in the center. After smudging with white sage and rattling to invoke directional spirits, a circle was cast, a candle lit. I sat on the ground by the St. Joan's wort, accepted and absorbed the heat of the day while bees of every size and color worked Joan's starry yellow flowers. It is mighty hot here but the humming of bees soothed me and my own sweat cooled me. Fire being the essence of transformation is often used to purify or let go of things in rituals. Instead I used it to call in change, igniting my desires written on slips of paper, one by one. I sipped the warm lemon balm water, taking in pure green light. Singing softly, I plucked Joan's yellow stars for an oil of magic and healing. The one thing I know for sure is that plants love to be sung to. More about St. Joan's wort here. 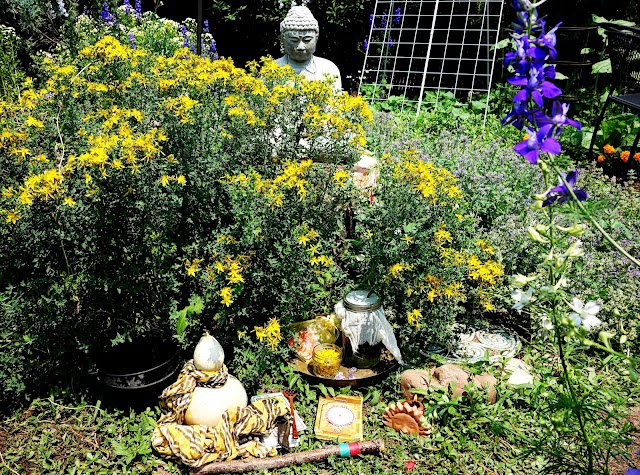 There are three more days until Midsummer's Day on June 24 -- each day presents its own opportunity for a bit of growth and magic. Mostly it's spontaneous but one thing is already in the works -- a faery offering on Midsummer's Eve.

Thanks for visiting and Happy Solstice -- I'd love to know about your Solstice traditions. 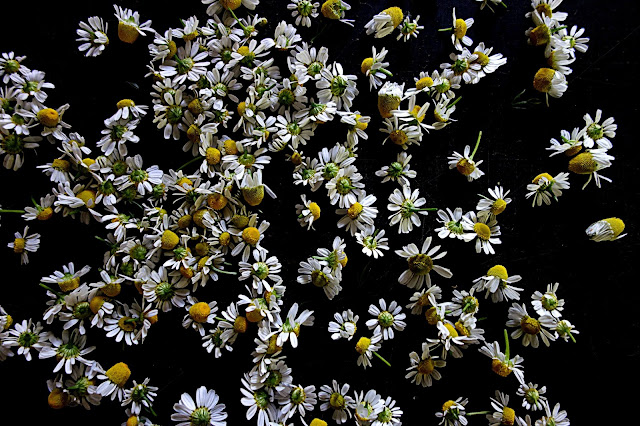 Chamomile flowers are drying for plant magic and plant healing -- Linda Rago says that magic and healing are interchangeable concepts because they are both the result of a conscious shift in energy. I like thinking about creating some fragrant chamomile magic. 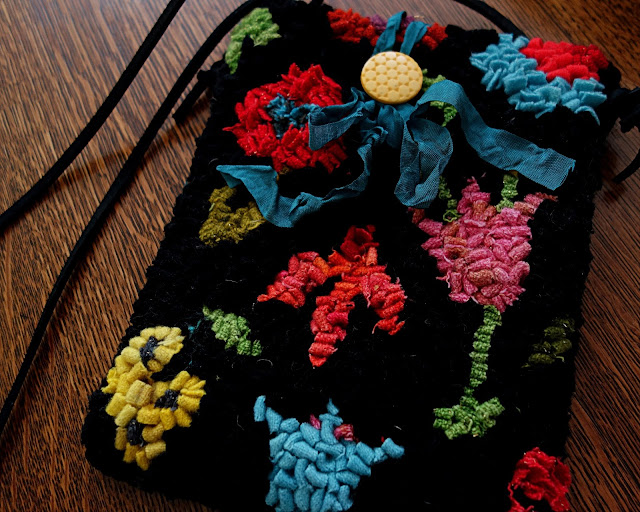 My friend Dulcy over at dulcysdoorstep and I just did a trade -- one of her gorgeous hand-dyed & hooked wool Midnight Garden bags for a June calendar moon cloth. I'm pretty sure I came out on top of this one. To me that vintage button closure is a golden honeycomb moon...I love everything about this bag. 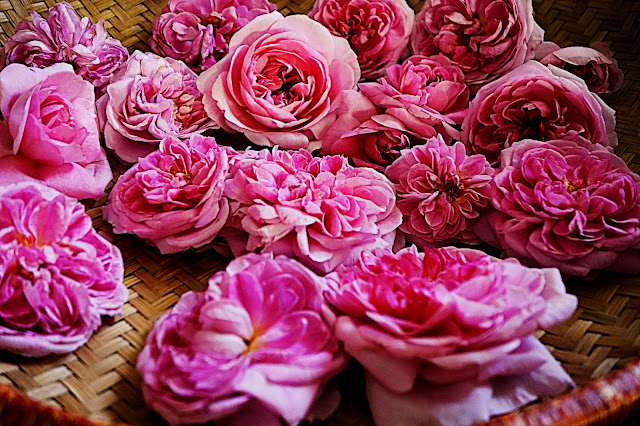 Roses are the heart of healing and magic...Gertrude Jekyl is my favorite variety for our climate and location, they always do well, if not in quantity they make up for it in size and fragrance. This first batch will be dried for either healthy heart infusion or a milder self-love tea. 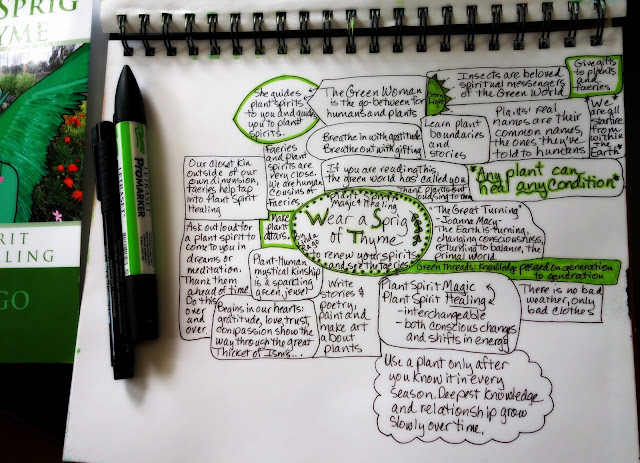 Oh, if I had known that a person can take notes like this, I would've been a much better note-taker my whole life long. By the time I've worked through this little book, the page will be completely full of brick notes. I refer to old notes from herbal seminars, lectures and classes fairly often -- and have always wanted to type them out to make them neater and easier to read, but brick notes will be even better. Think of all the facts, ideas and interesting phrases that could be brick-noted. I have never been a highlighter, if I don't write it down, it is lost so I really love this. They can be as simple or as elaborate as needed, some chapters will need their own page and one page could also hold many books or one lecture per page. Like that. I learned about brick notes here. 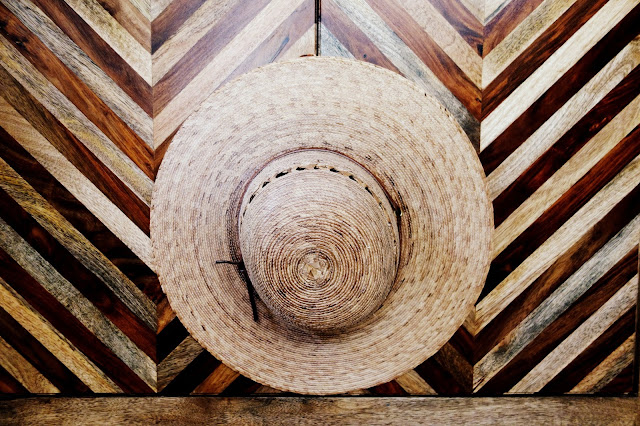 My garden hat hangs on a cabinet by the back door. It does the job too but the brim is over-sized so I'm looking for a smaller western style hat now. The lady wants a straw cowboy hat.

Today is a waxing moonday in the sign of Libra. The Libra moon helps create balance, justice, comfort and peace for all. Healing magic. xx