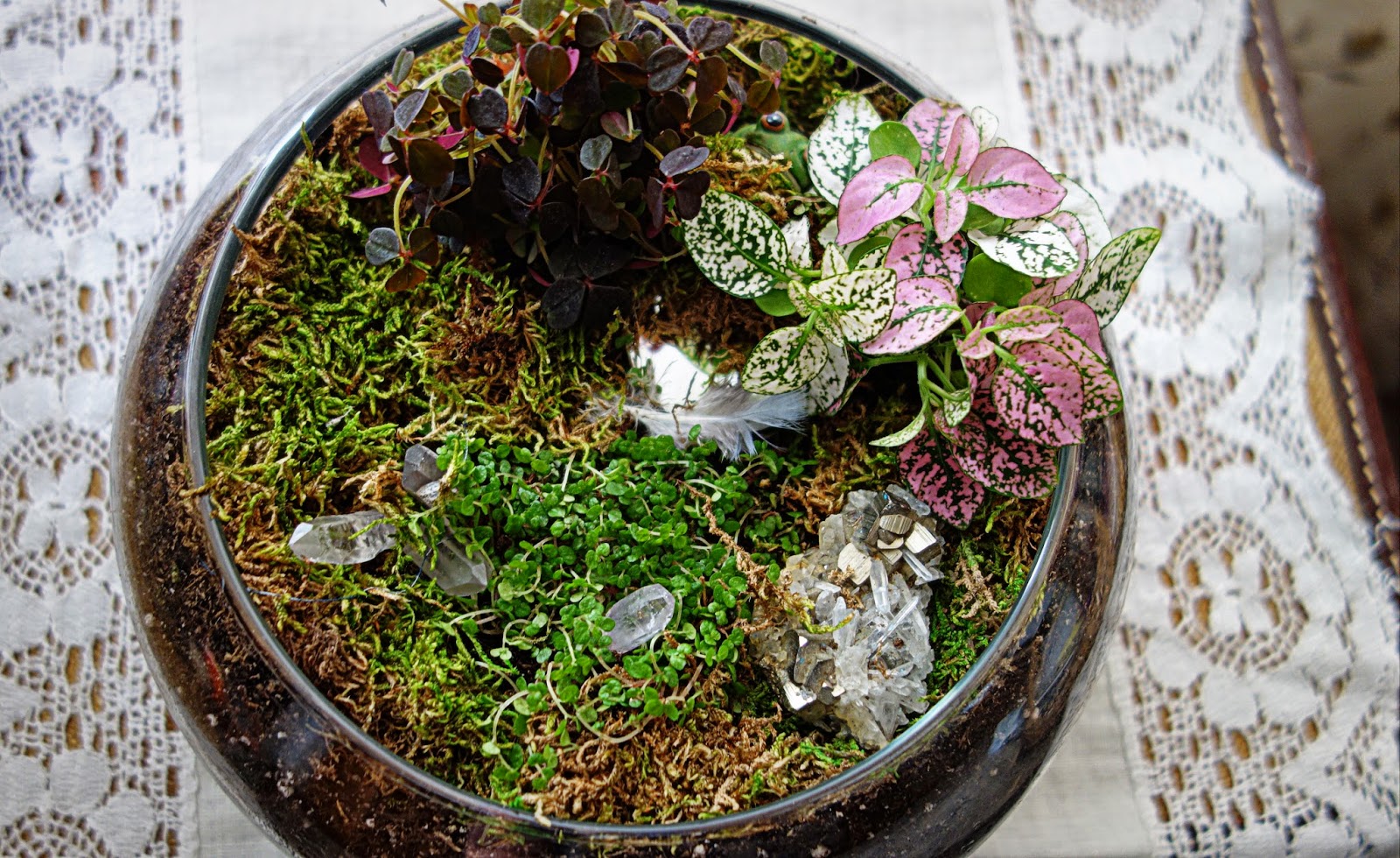 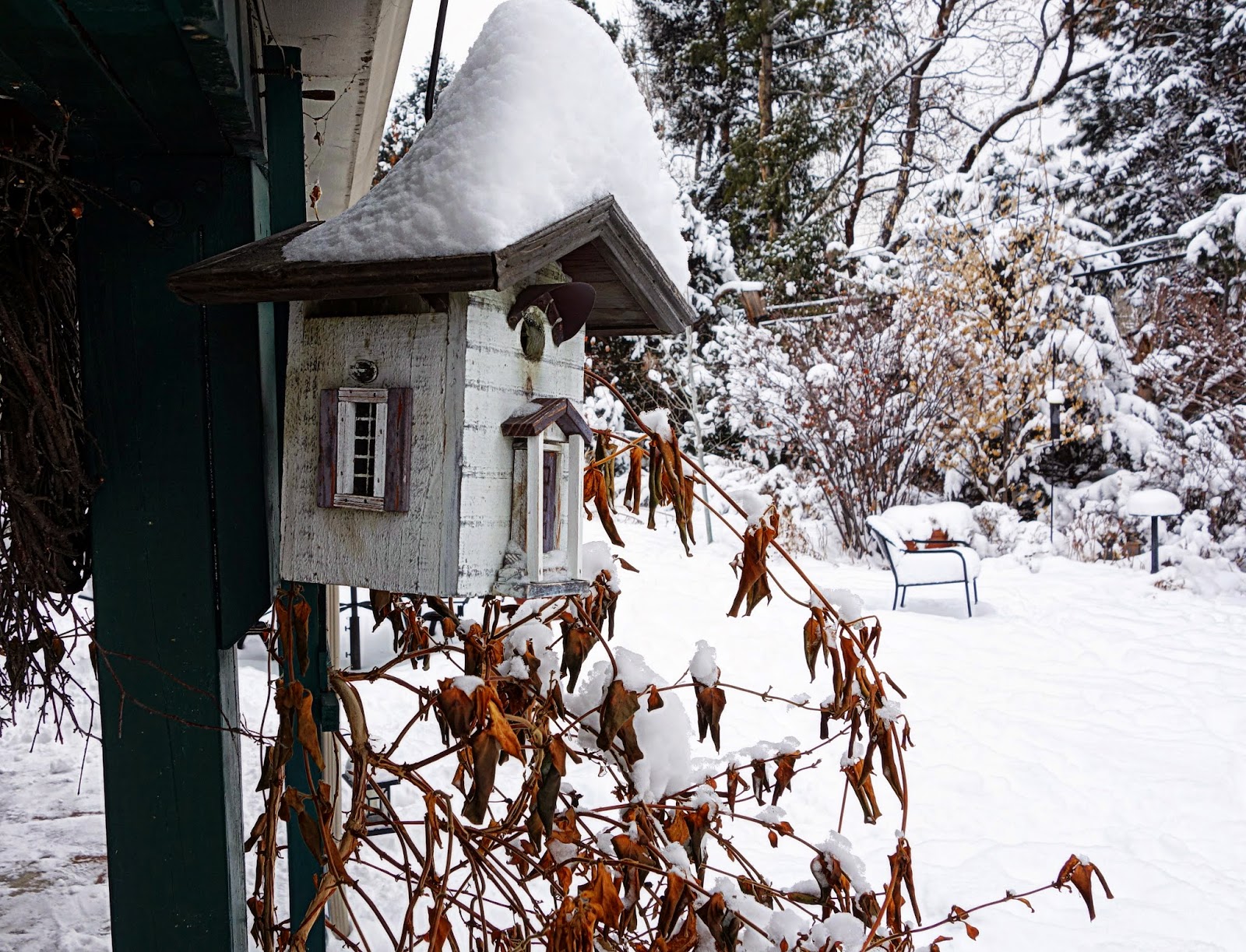 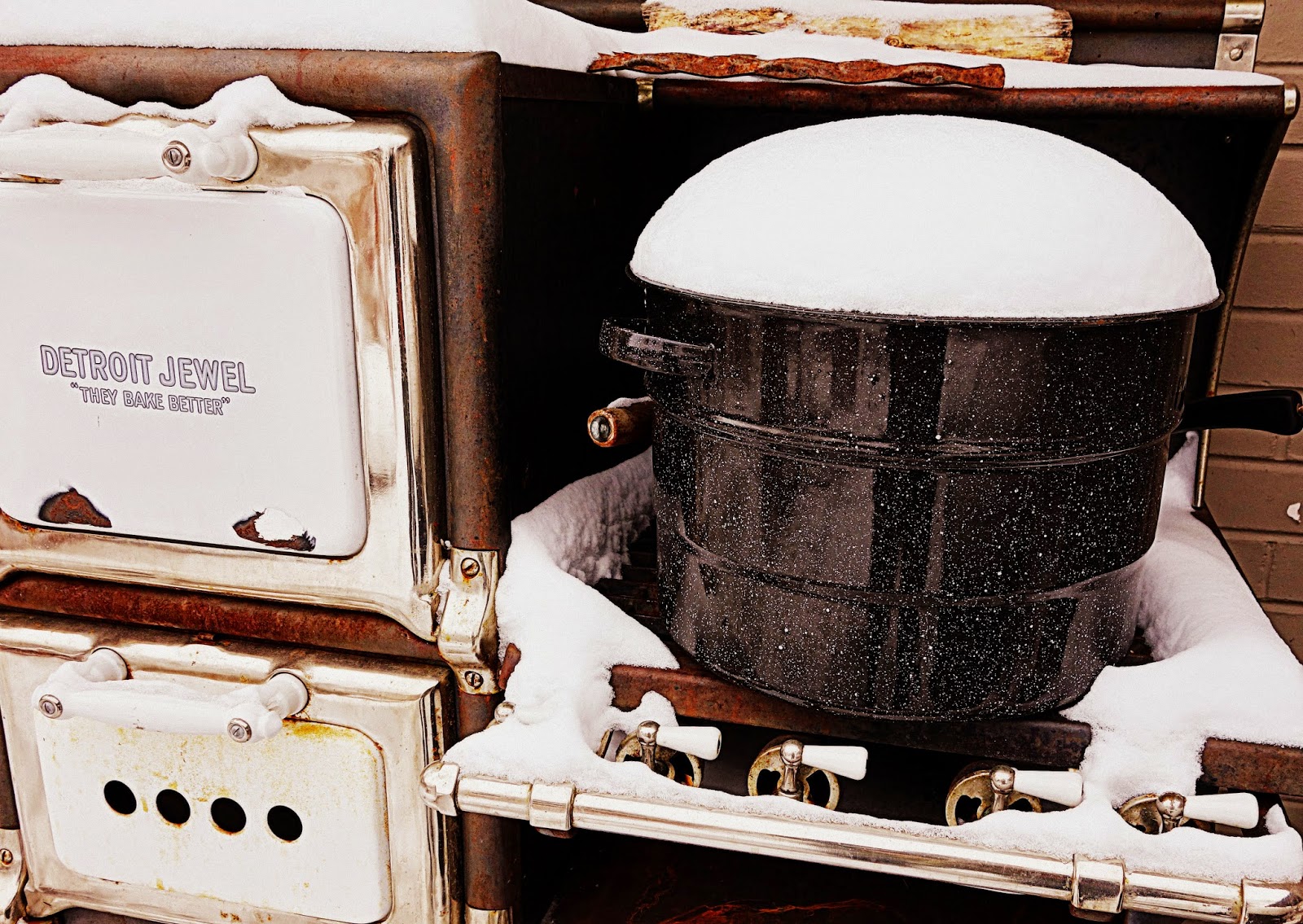 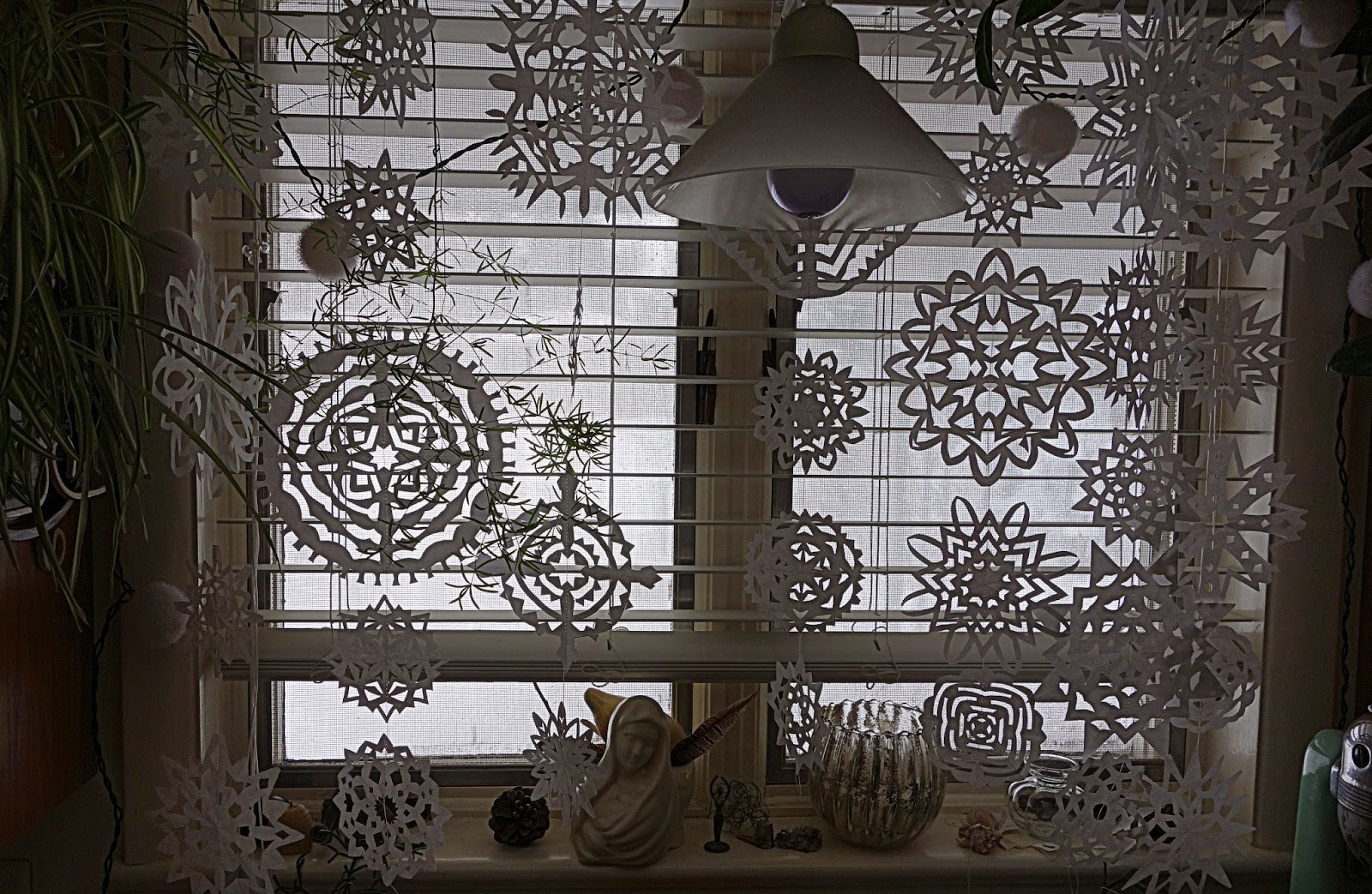 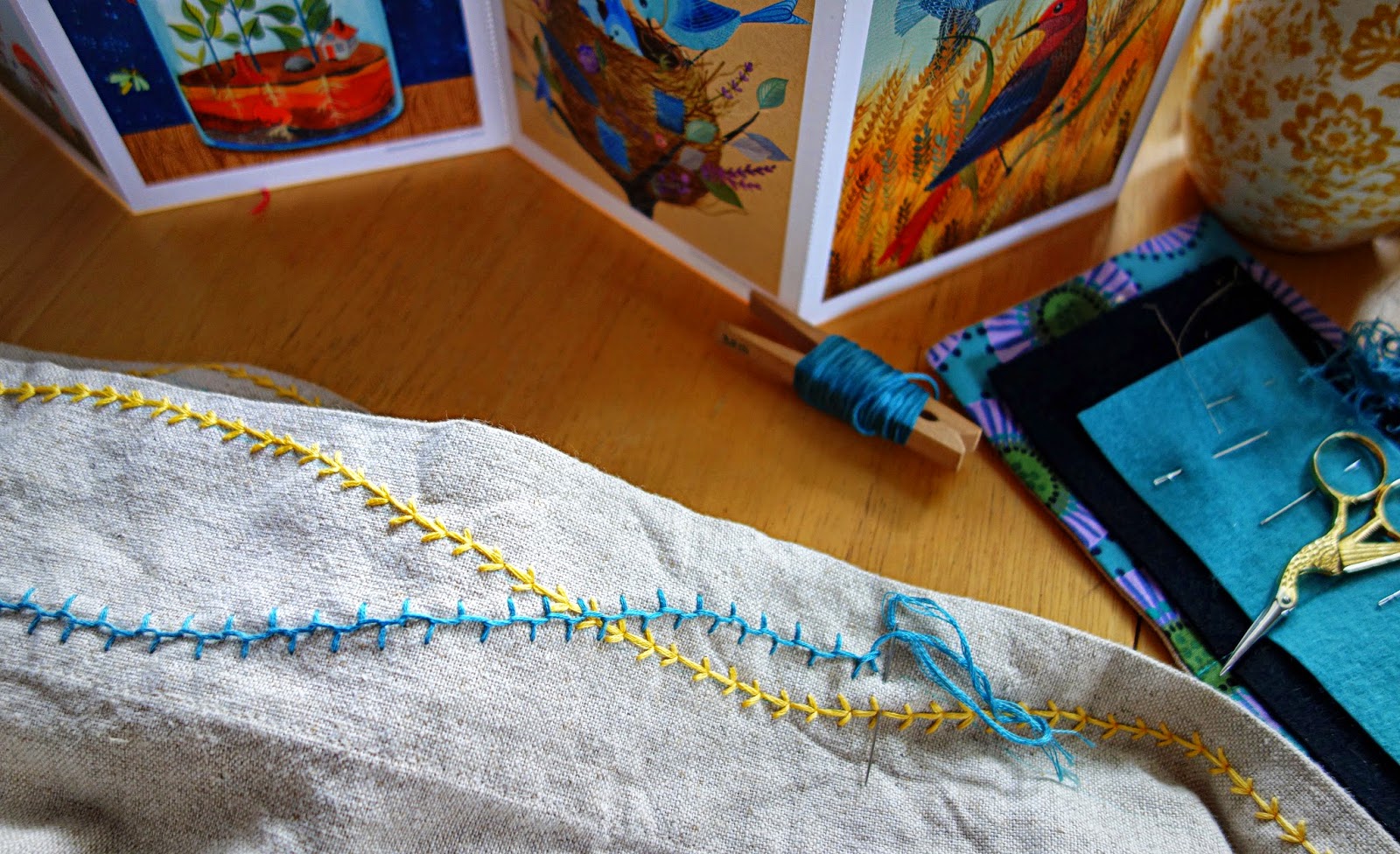 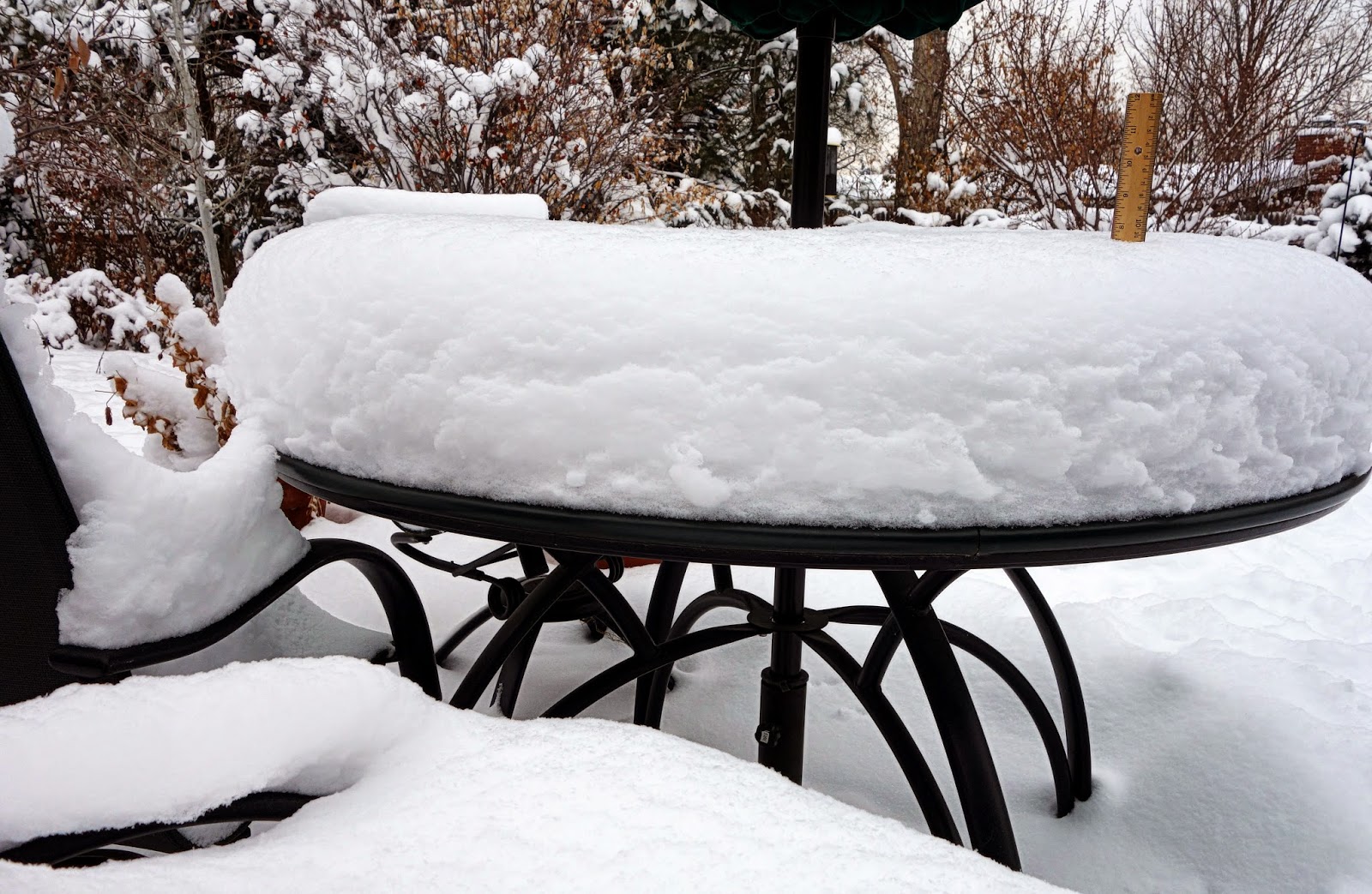 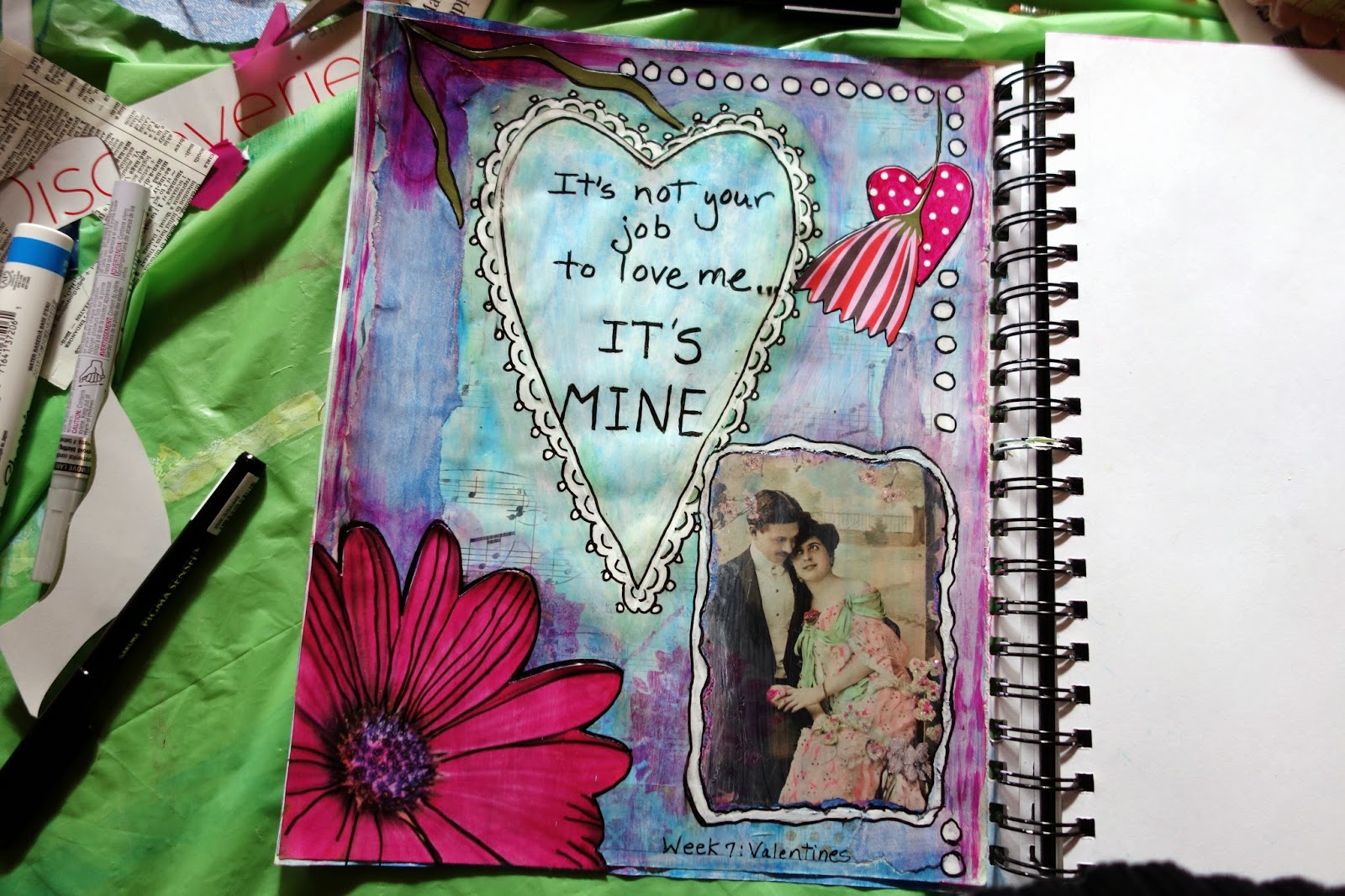 We have almost 8" of snow and more to come this week. Like Garrison Keillor said on the Prairie Home Companion radio show the other day, I am in no way complaining, taking into account what Boston and other areas have just gone through.

The view out the kitchen window (through the snowflake curtains) was dark and snowy this morning but even so, that little crystal dish garden gave my day the green light. One thing about snow days is you get to do what you really want to do and not what you think you should do. For me, that's been stitching a little, knitting more, reading the Outlander book Drums of Autumn, looking at seed catalogs, drinking tea all day long, and doing art stuff. Journal52's week 7 is valentines -- I changed one word of the Byron Katie quote, turning like into love. I really believe it and I don't think she'll mind.

On another note, I've already read twice today that February is the time to do early spring cleaning because its name is based on the Latin word februum, meaning purification. And purification is cleaning. It's all really very positive if one can only get in the right frame of mind to do it.

Today is a waxing moonday in Taurus. As the moon grows into fullness, other things grow right along with it. It's one of those things that you don't have to believe in, it just sort of happens that way regardless. Our bodies absorb things better now (both nutrients and toxins) and we hold onto water weight more now too, have you noticed? This same principle applies to gardening -- the closer we get to a full moon, the more seeds will absorb and hold water from the soil. After the full moon things begin to swing the other way.

Thanks for visiting -- this quote makes me smile....and I do believe in miracles.

We live on a blue planet that circles around a ball of fire next to a moon that moves the sea, and you don't believe in miracles?
(thegoodvibe.co) 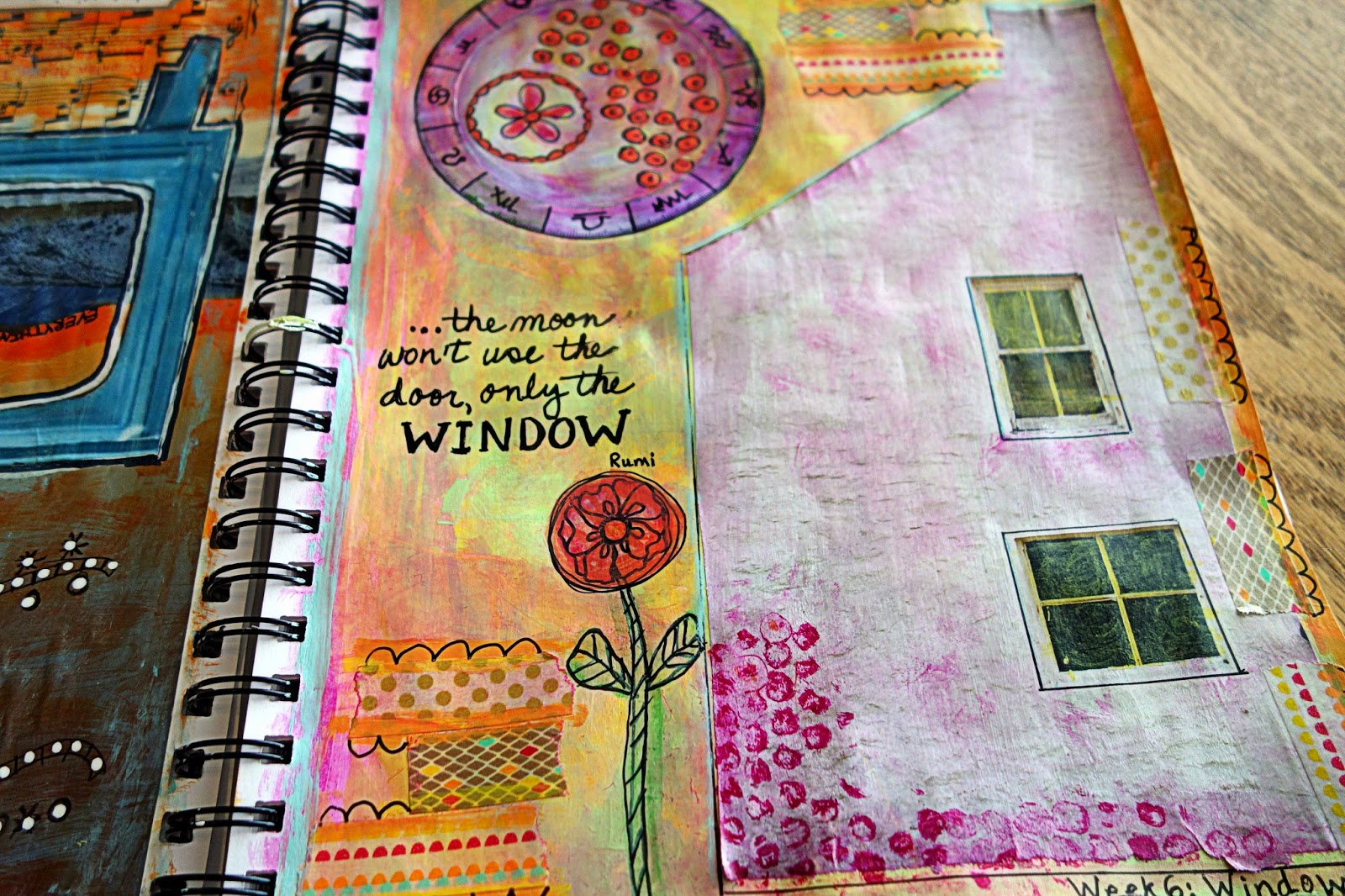 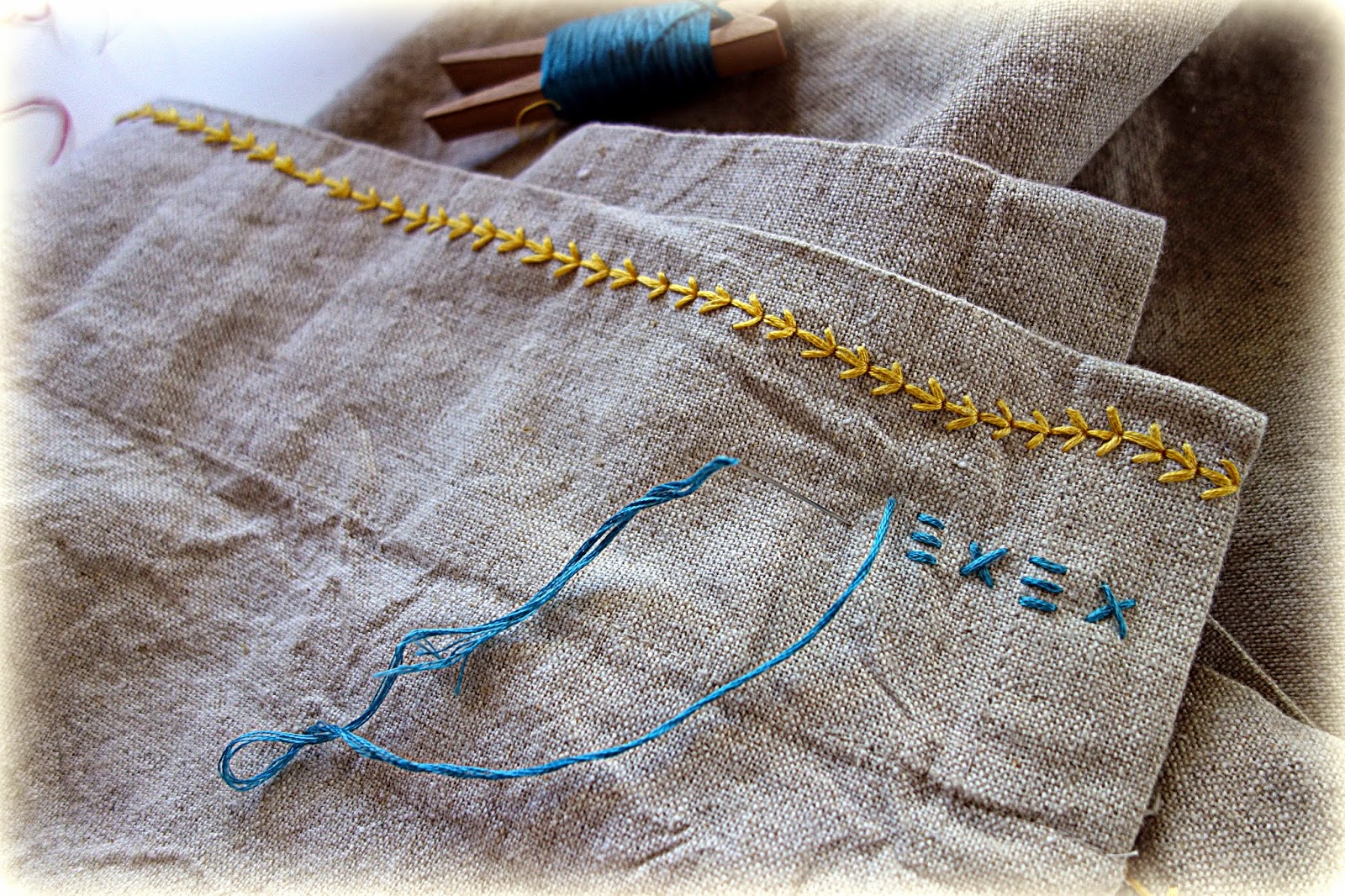 A January moonlit path has been made with glowing fern stitches -- meandering across 54" of linen cloth. Today is a new moon in the sign of Aquarius and I am changing my moon stitch ritual to begin on the new moon rather than the full moon. This way, the journey can flow and grow the entire moon(th) if that's what it takes.

Not sure if I'll stay with the brick & cross stitches up there because they look like ex ex ex ex. It's usually a filler stitch sequence, if I add another row it'll look more like itself. These first steps may take a while to get going.

Window is the prompt for week 6 of the Journal52 Project. My quote is from Rumi's Some Kiss We Want, the same poem I wrote on muslin cloth way back when. I'm using more paint now on these art journal pages and have a little more confidence with layering color and texture. I have lived my whole life until now without ever having experienced the feeling of painting -- not so crazy about my outcomes, but love the actual painting process. A wonderful discovery -- it's another new room in my dream.

A new moon is when to begin anew. To plant seeds and grow things. Both moonlight and sunlight are growing right now and I may have written them before, but I really like these words on Yogi teabag tags, "live light, travel light, spread the light, be the light." I've been saying it to myself a lot lately. 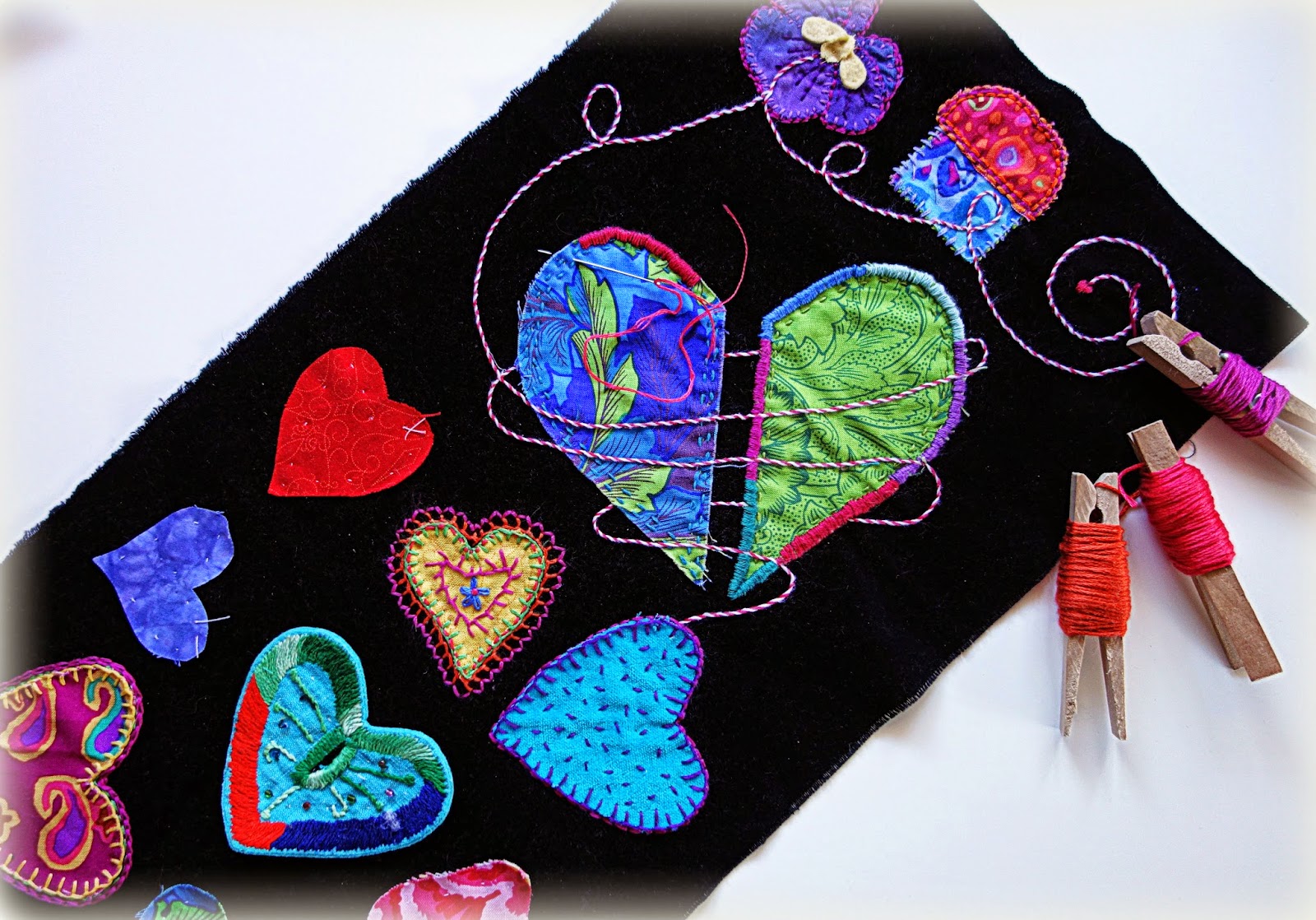 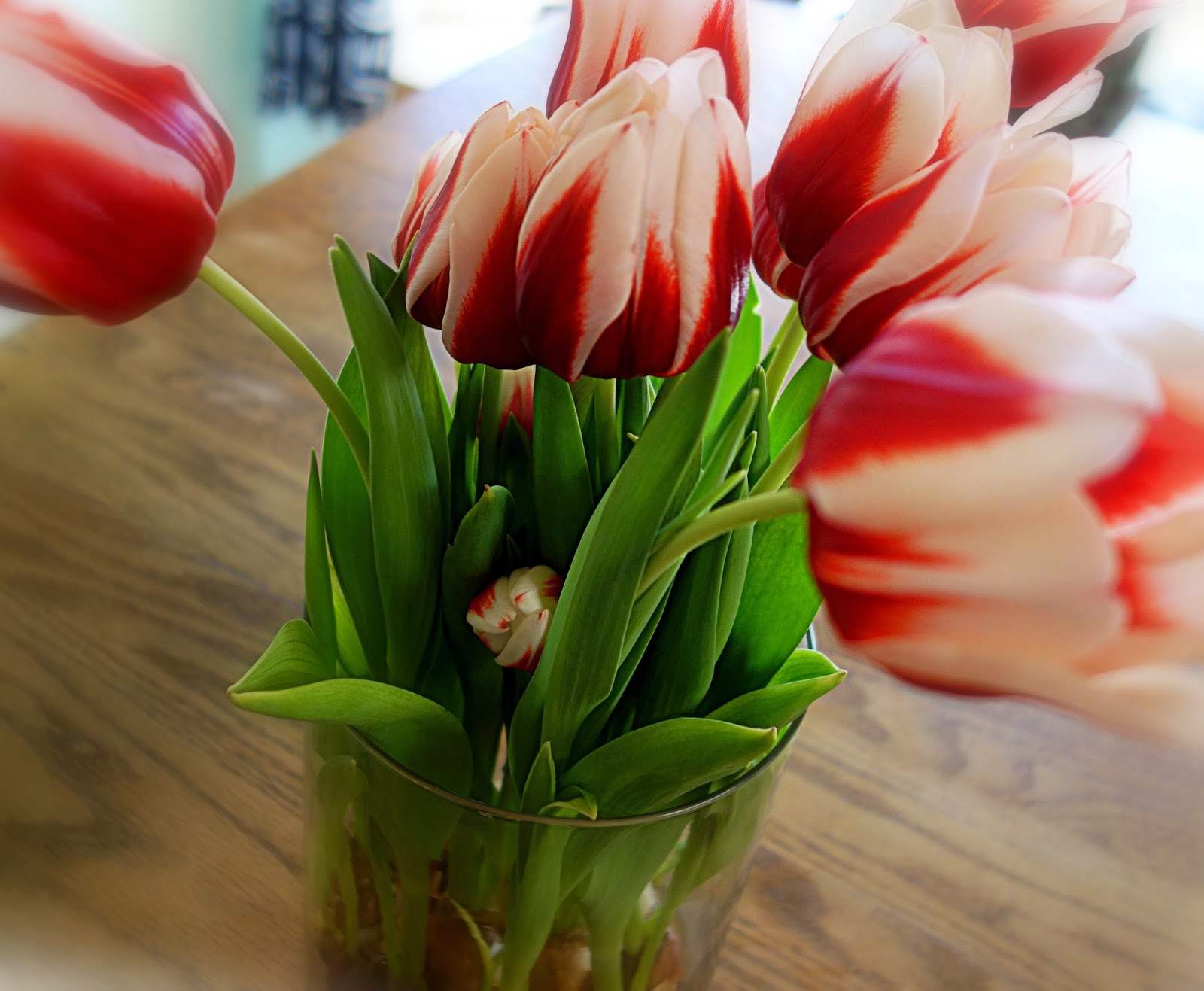 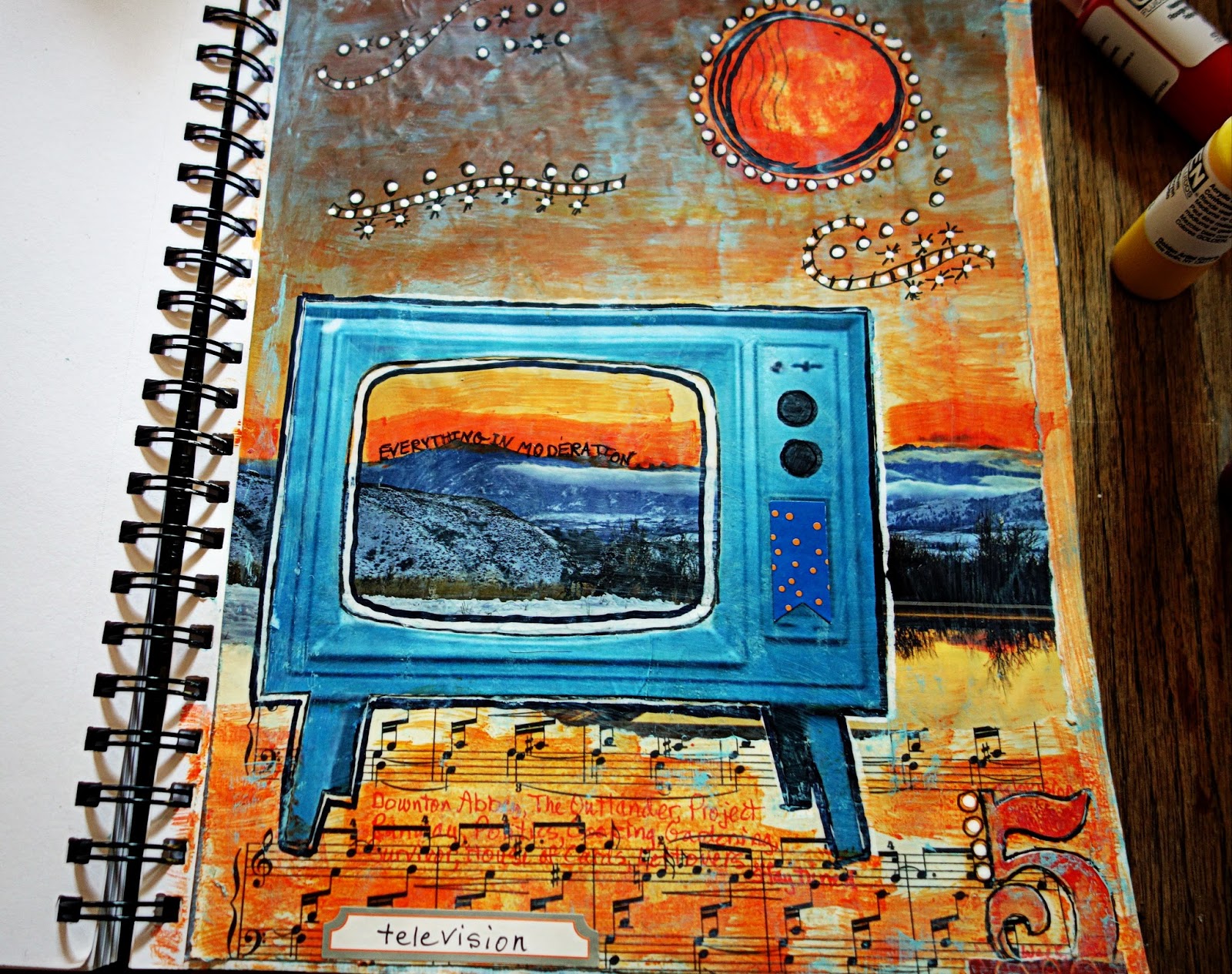 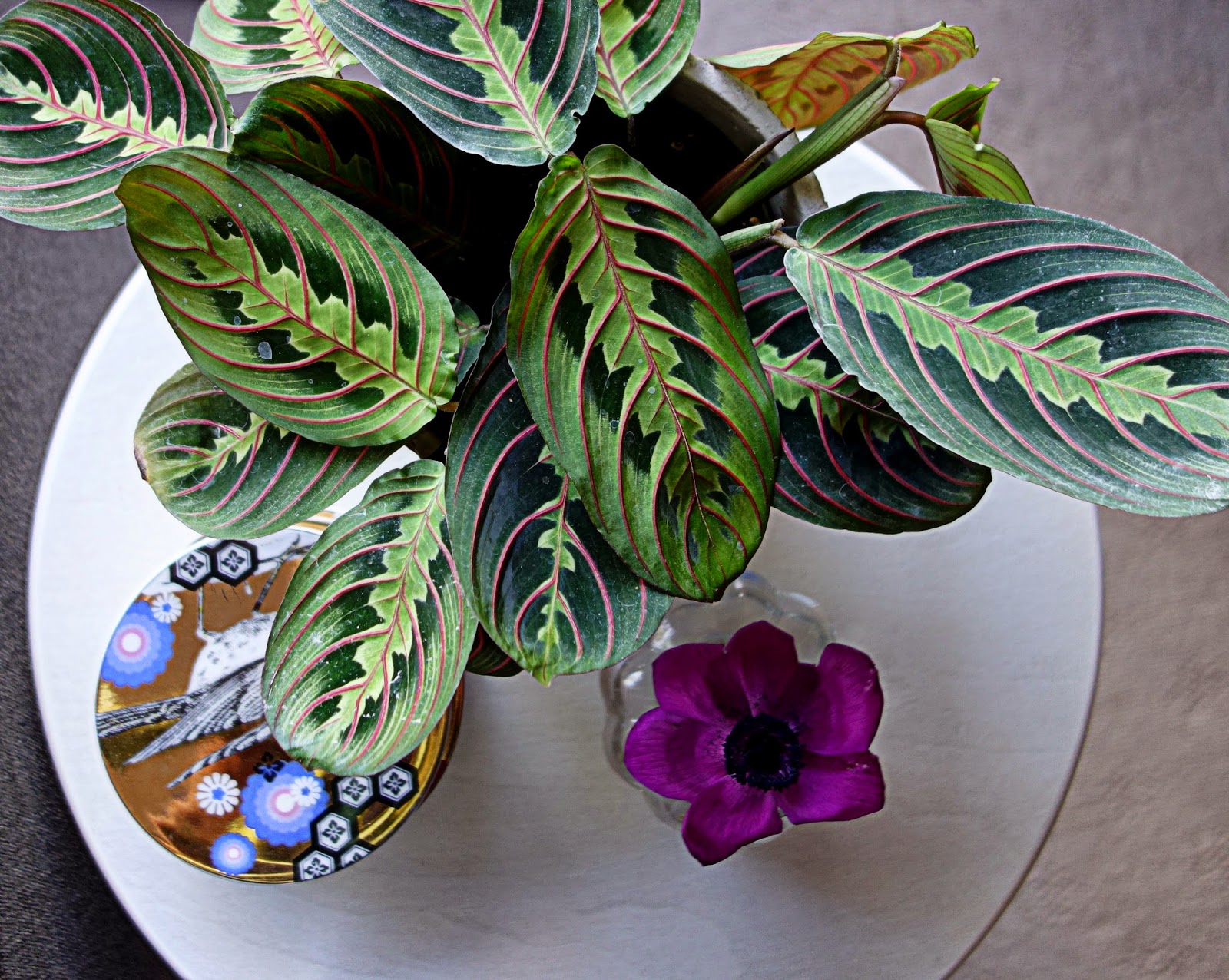 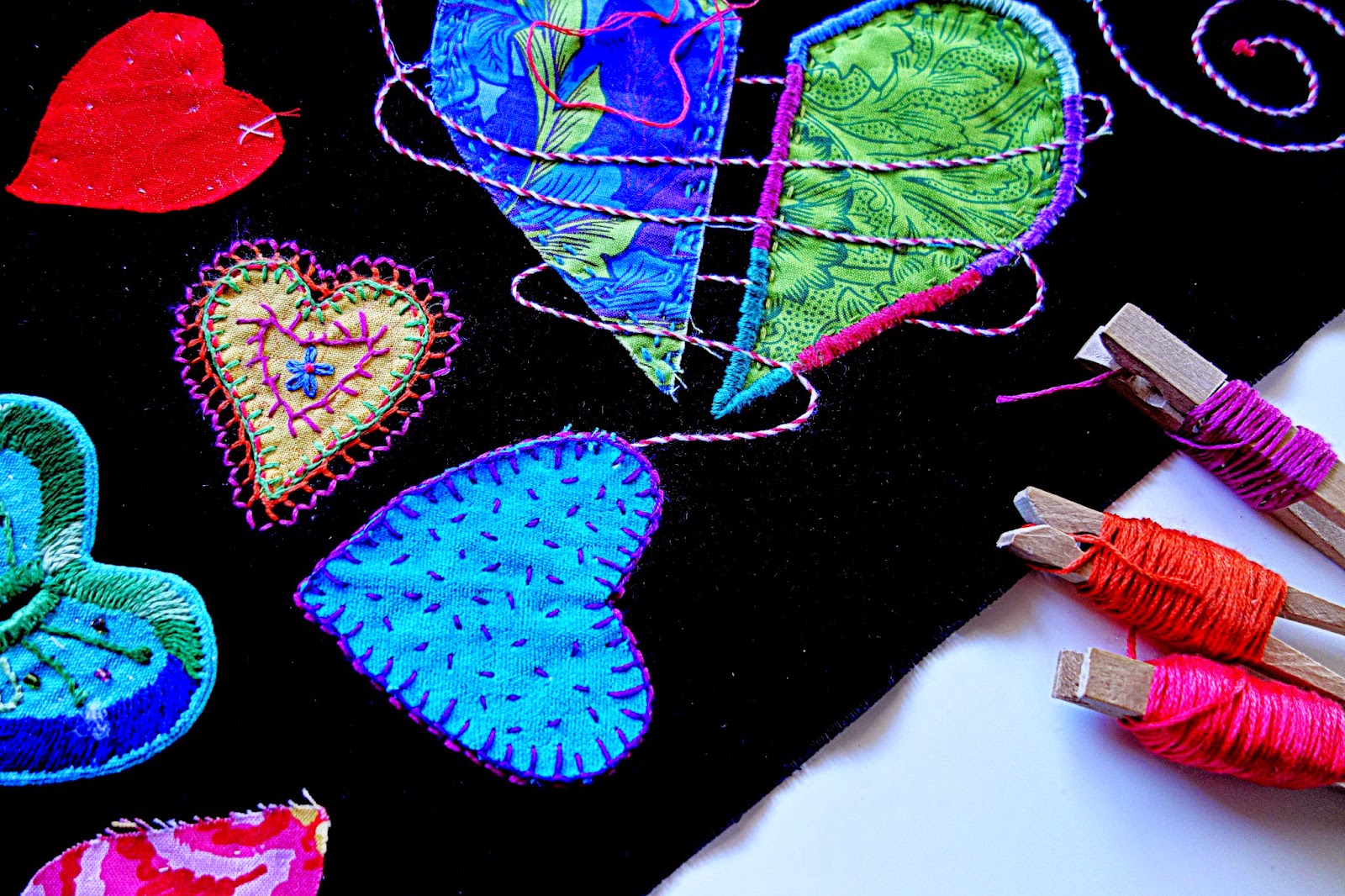 Today I'm softly stitching hearts on the black velveteen long-cloth -- it's at least four years old already, and it may take another four years to complete. Because there is nothing too serious going on here -- it's one of those pieces to turn to when everything else seems too hard.

It's a given that February is when one finally succumbs to one's urges and buys a few houseplants. That's a Prayer Plant, Maranta leuconeura, up there and I'm in love -- it magically folds itself up at night while it sleeps. Almost like a human curls into a fetal position.

The tulips were a lovely gift -- the bulbs sit on a screen at the base of a tall glass vase, then root and grow in water -- they can't really get very wonky like tulips always do because the vase is so tall. And the vase and screen can be reused to experiment with different kinds of bulbs which will be fun.

Week 5 of the Journal52 Project is television. I consider myself a moderate TV viewer. Everything in moderation. (I might still add the words including moderation by Oscar Wilde.) These pages are not meant to be works of art although it's hard not to over-think the process. I try to do them in a short period of time once I have the idea. Like maybe an hour or less of actual gluing and painting and doodling. Perfectionism is my worst enemy. Back to TV -- Downton Abbey is my favorite show right now. I'm worried we're getting close to the end of the season though because things have been building. But at the same time, several subplots were just resolved. So is it building or resolving? Whatever happens, it will be wonderful.

Today is a waning moonday in the sign of Libra. To feel steady and balanced as I move into the growing darkness, to fold up like the prayer plant, to sleep and dream... 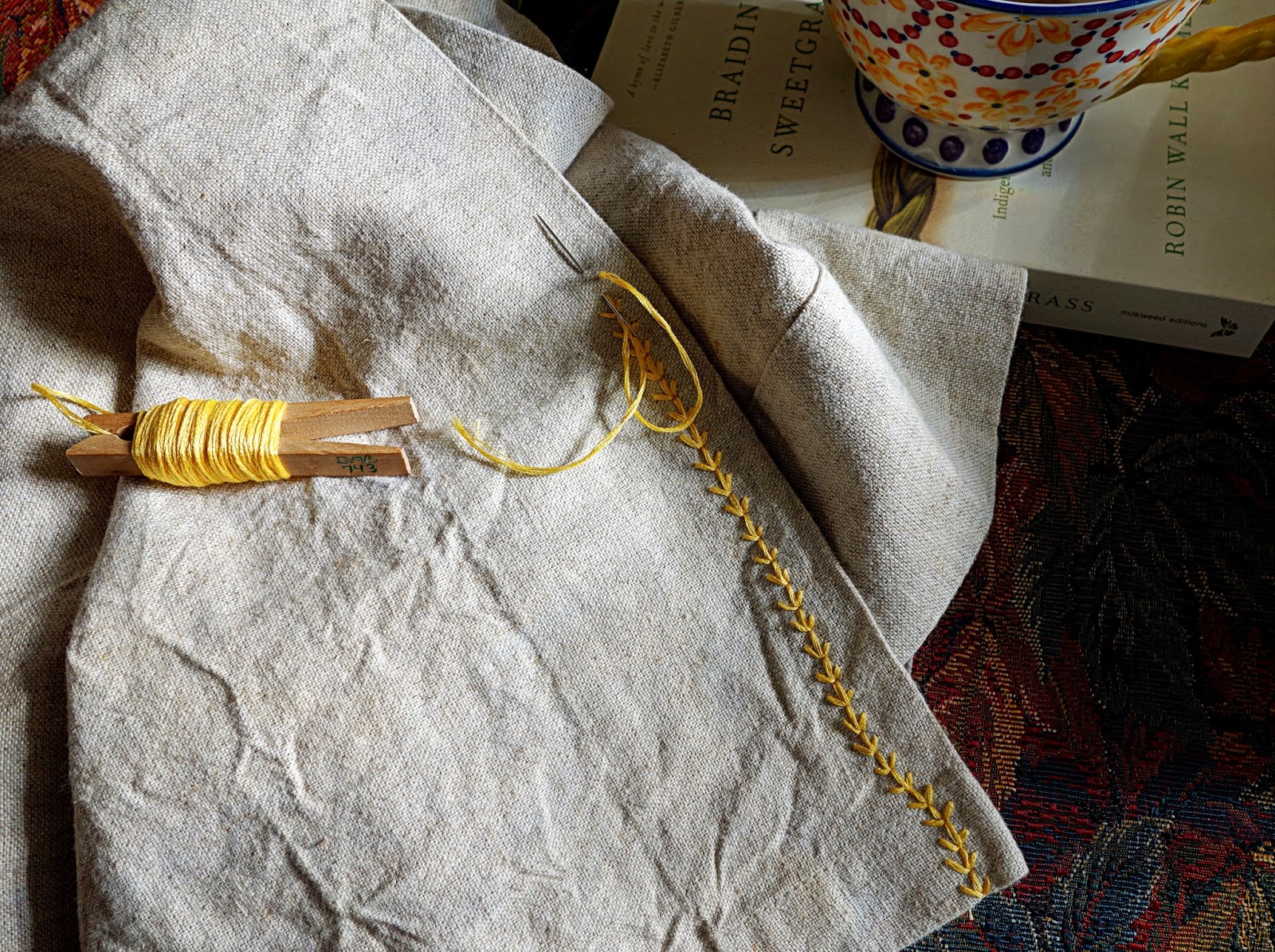 pathways is my 2015 full moon sewing ritual -- long embroidered paths across an old thrifted linen runner, one path for each full moon. Turmeric yellow certainly seems to be following me around lately -- it's a strong feel-good color though and I like it. The meandering fern stitch is nice and easy. Gives me the mental space to do some inner meandering -- thinking about good things that have come to be and how grateful I am that they have. Moonwork.
Posted by Peggy at 3:47 PM 6 comments:

It was wonderful to wake up to six inches of snow on Brigid's Day. I wove some Brigid's crosses, traditionally used as protective house amulets. I like the old ways and the sense of traveling a well-worn path. And it felt so good to have my hands on something from the Earth. 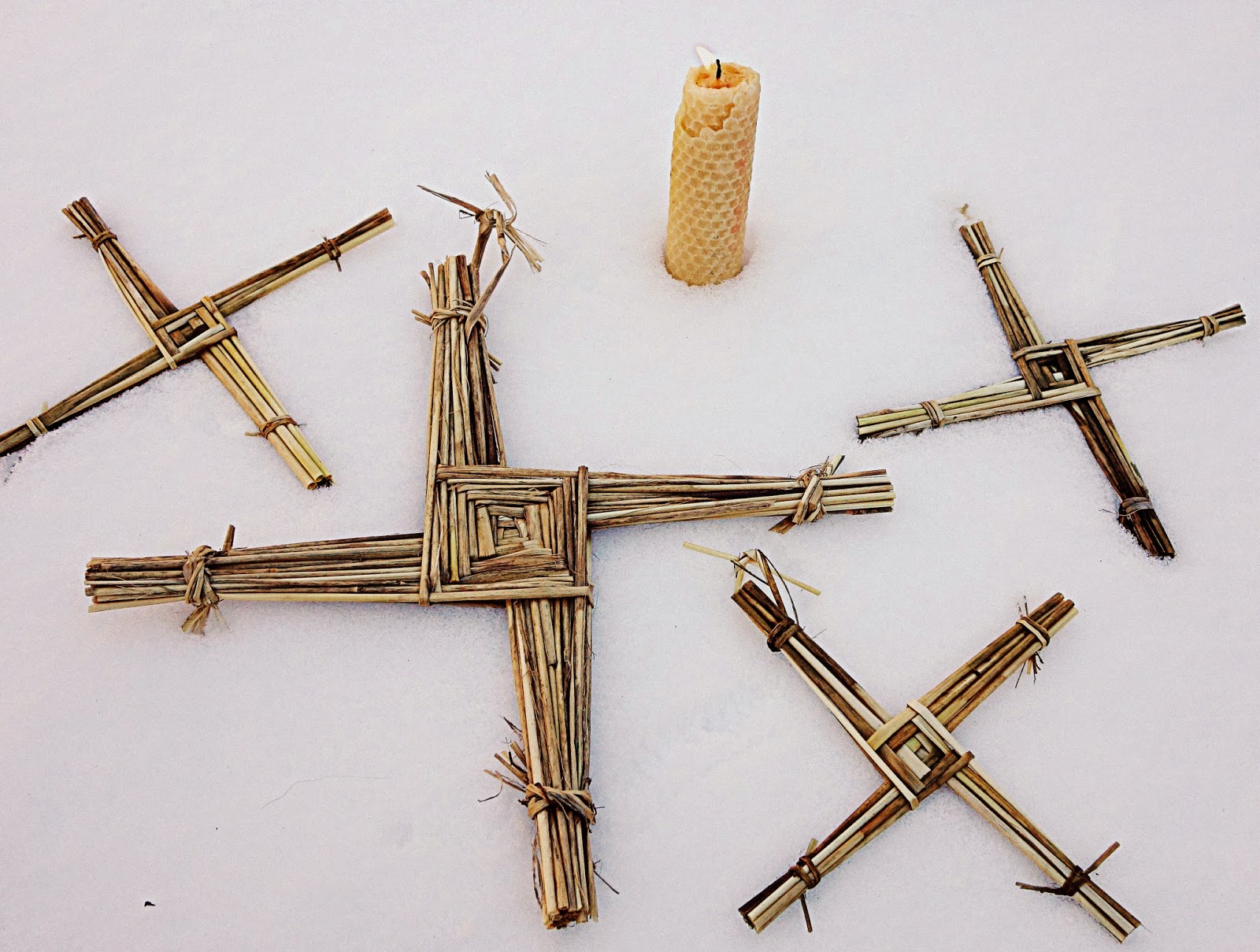 I've been reading about and experimenting with ways to make golden turmeric milk. Turmeric, Curcuma longa, is front and center in the news lately -- its most well-known compound, curcumin, is anti-inflammatory, antioxidant, antitumor, antibacterial and antiviral. I'm interested mainly in the anti-inflammatory qualities of turmeric with a food-as-medicine approach.

There are many ways to make golden milk, so far I like using fresh turmeric and ginger roots together the best. The batch in the collage photos is made with whole cow's milk but you can use any kind of milk. Some recipes call for cinnamon, cardamom or other spices. Some make pastes and add water for a tea, and a few mention adding pepper to enhance turmeric's healing action. 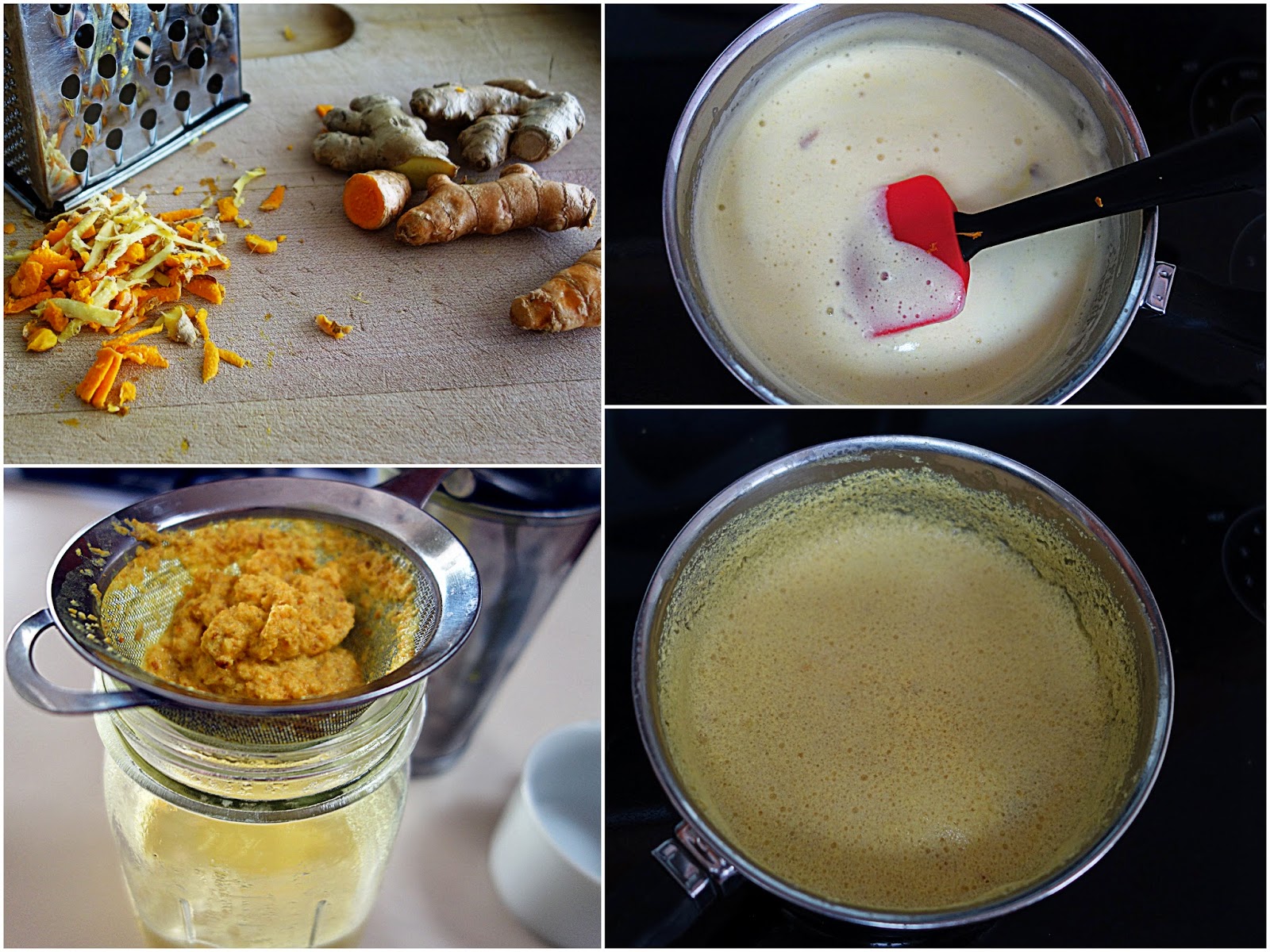 Heat and hold just below a simmer for about 5 minutes, stirring often. Take off heat, put lid on pan and let sit for another 5 minutes. Blend and strain, I use an immersion blender and a metal strainer. Sweeten if desired.

A teaspoon of honey makes this absolutely delicious. I've been having about two-thirds cup a day to make one batch last three days. 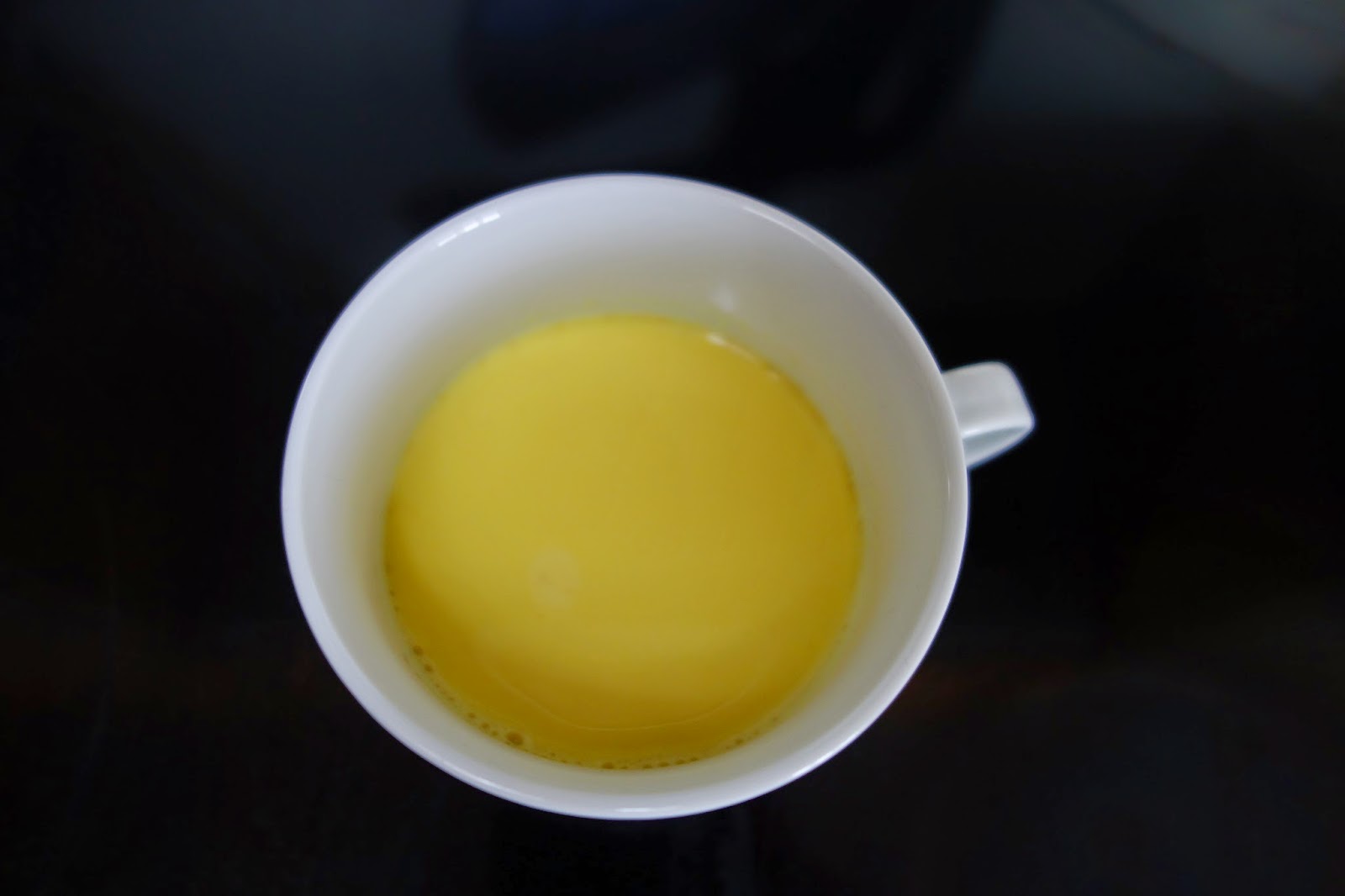 I froze some of the strained turmeric and ginger root pulp for recipes that call for these flavors. 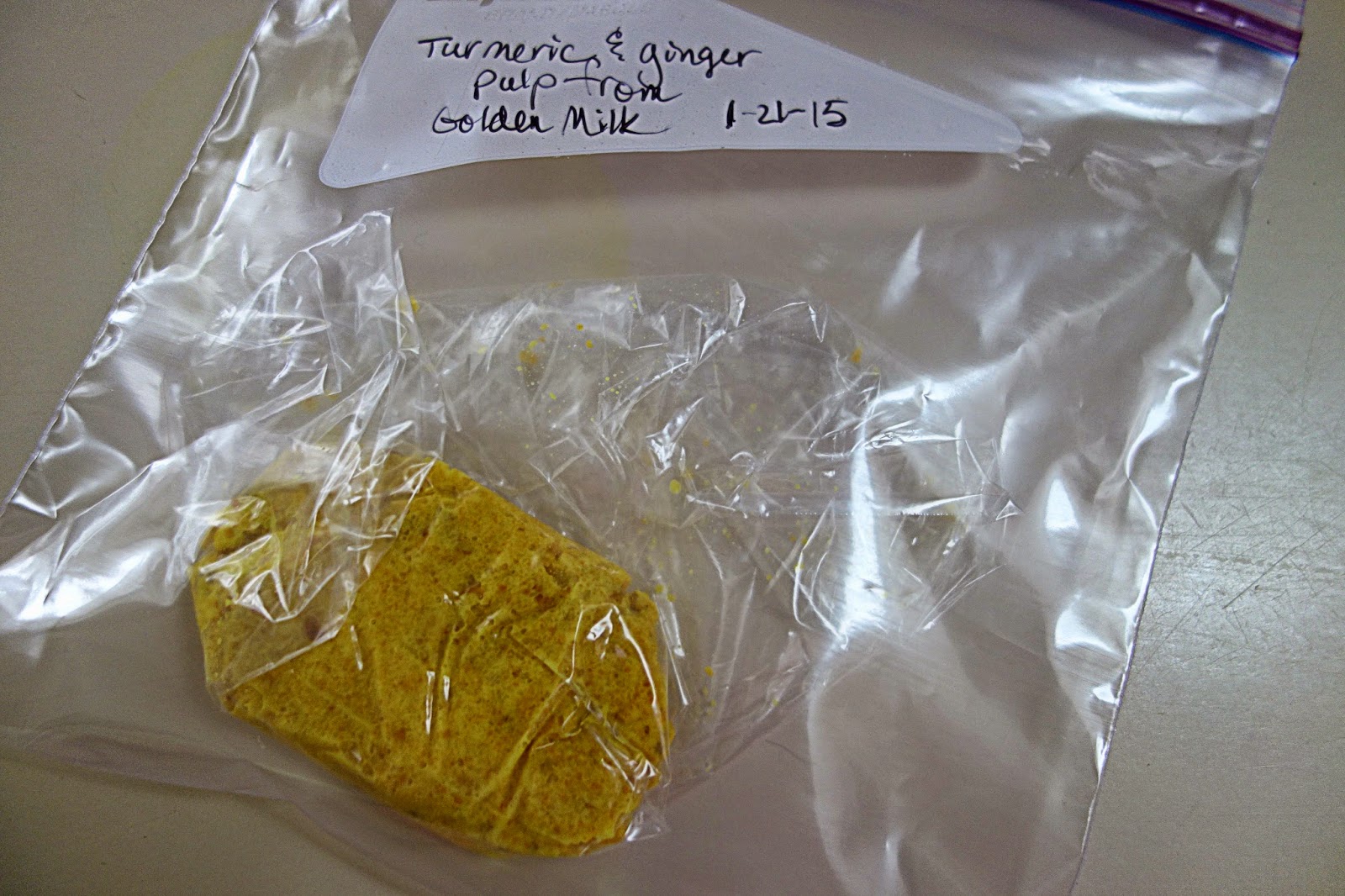 I've also been making golden milk with homemade almond milk which is fabulous, but more work. In the batch below, I used almond milk with dried ingredients -- 1 tsp. turmeric and about 1/3 tsp. ginger -- but otherwise made the same as with fresh roots. Powdered herbs need to be strained with cheesecloth instead of a metal strainer -- I'm saving the dyed cloth, of course! 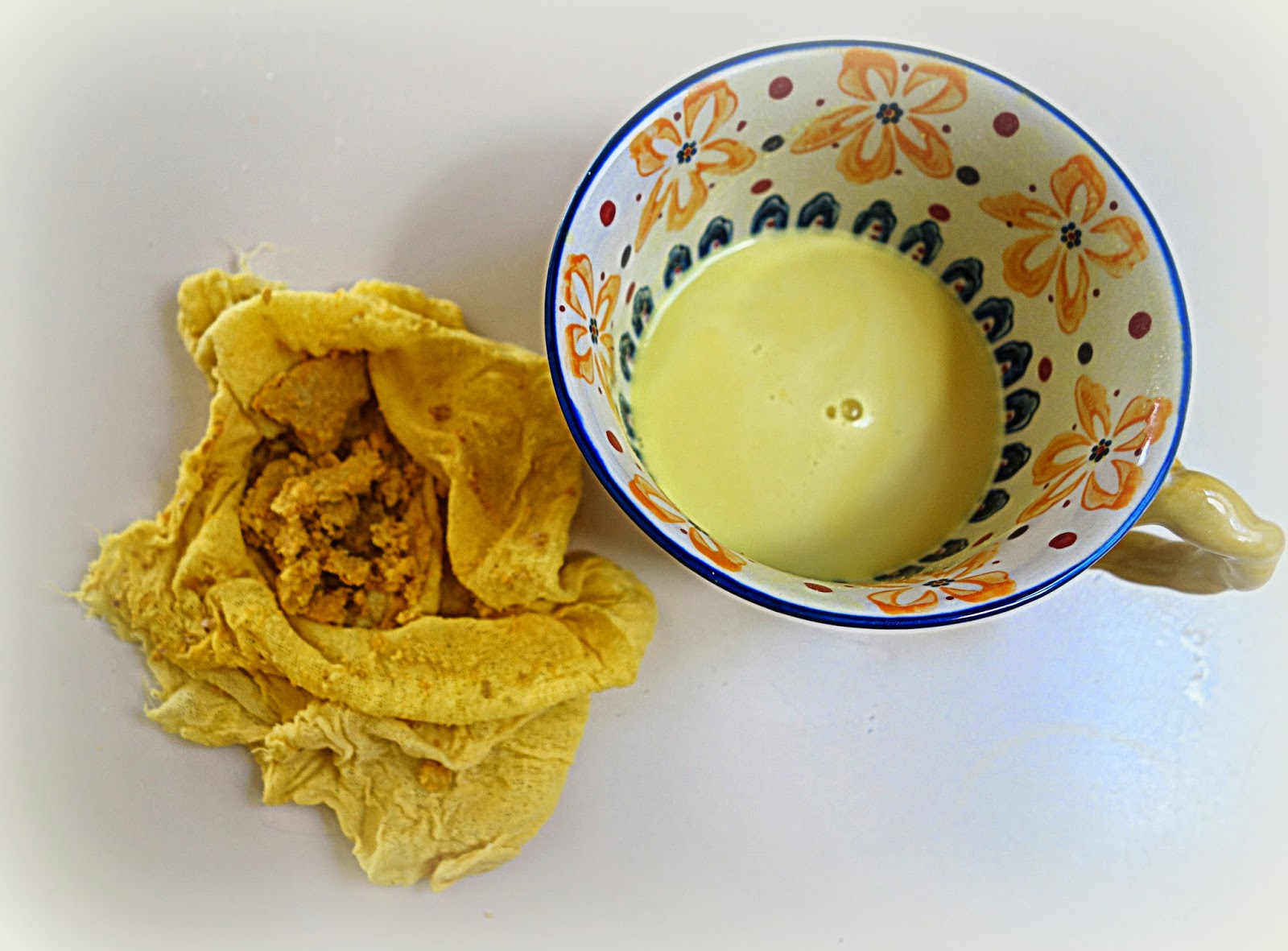 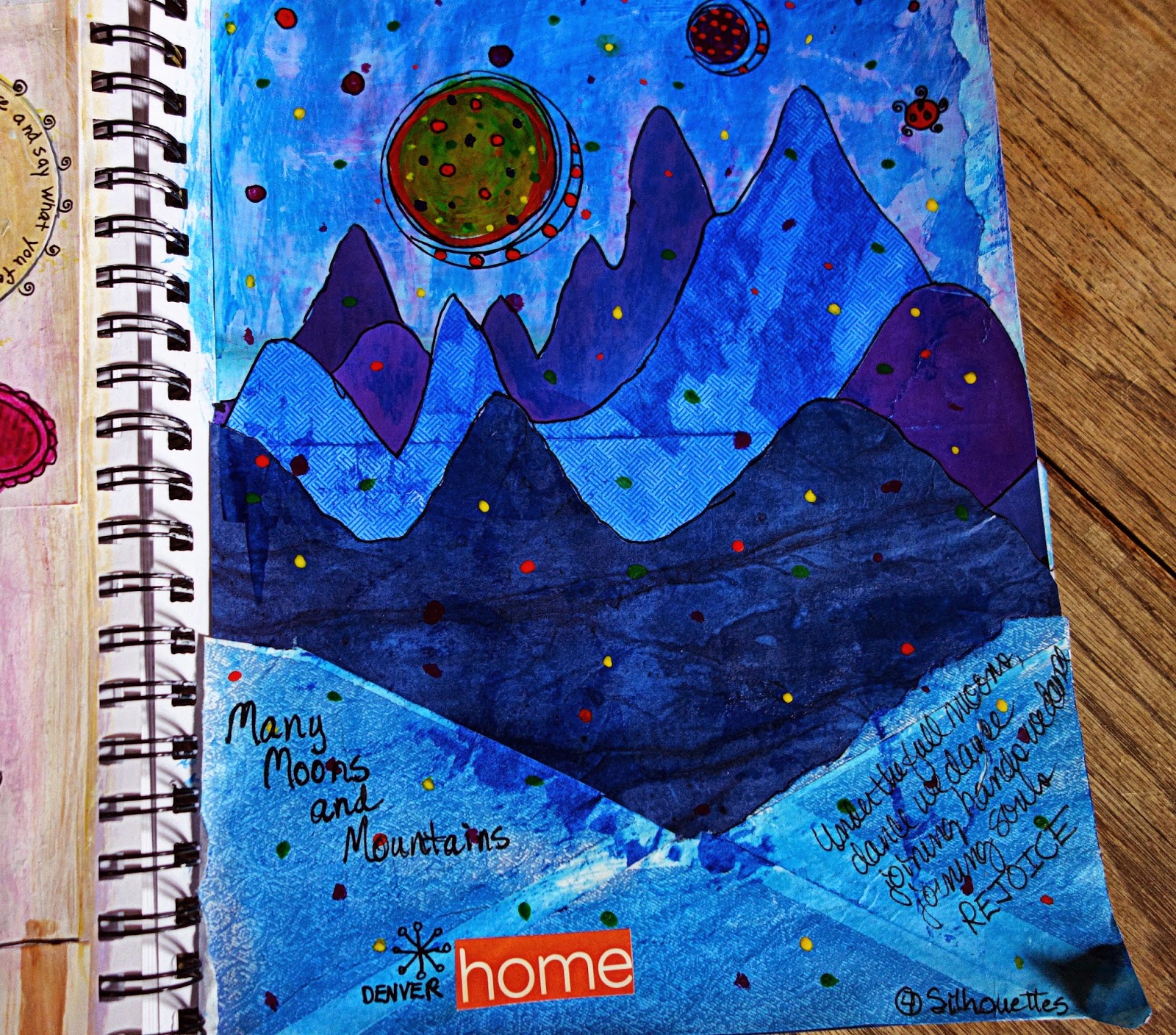 Week 4: Silhouettes for the Journal52 project -- painted and glued and painted some more. And a deconstructed linen moon has been reconstructed with one change. It's been invisibly basted and it's ready to go -- let the stitching begin. 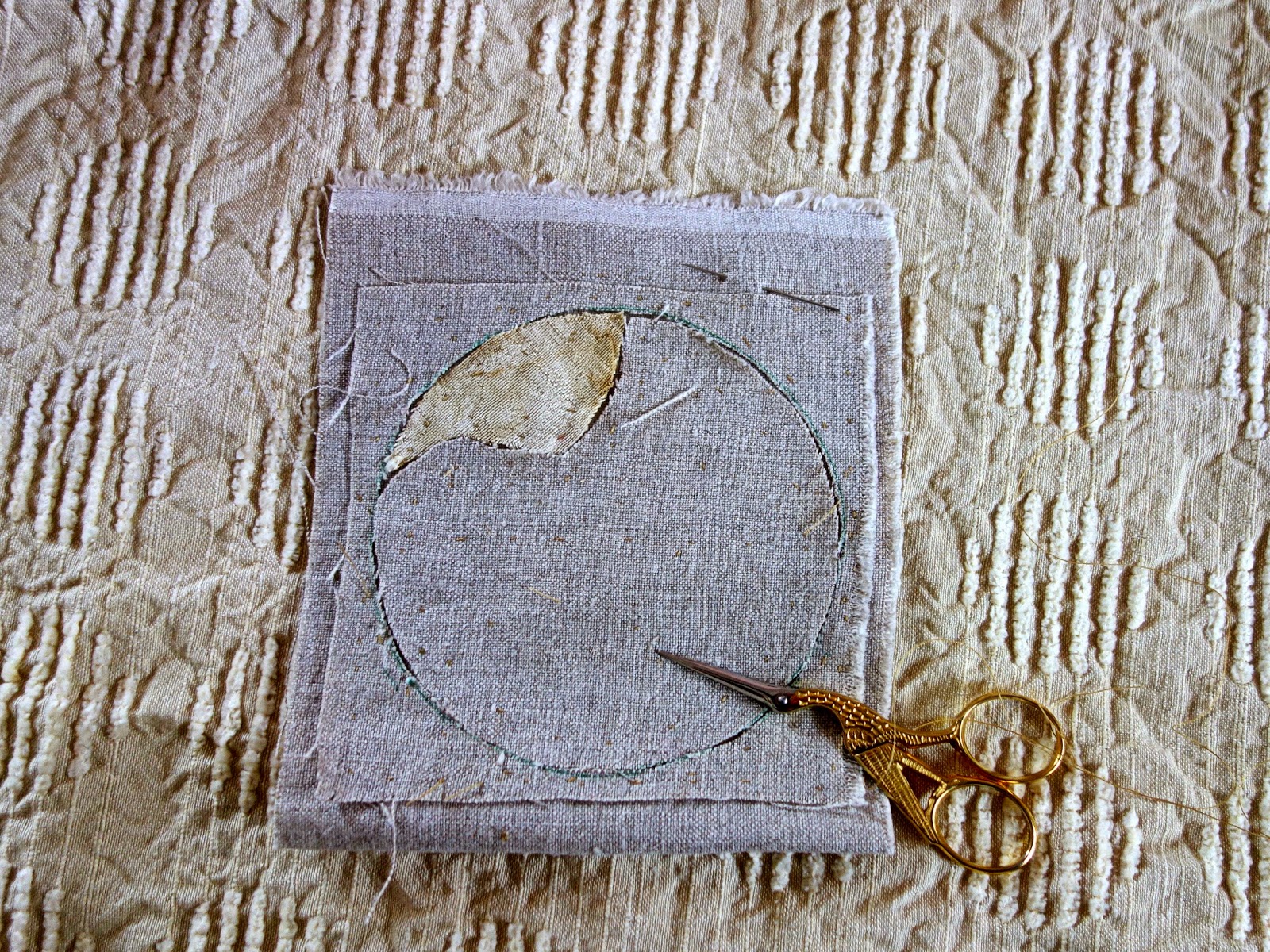 Today is a waxing moonday in the sign of fiery Leo. Ruled by the Sun and affecting the heart and upper back, some Leo aspects are -- playful, self-confident, straightforward, romantic and honest. I think the term open-hearted might apply to those Leo qualities, don't you? Tomorrow will be a Leo full moon -- hope we all have a Leo-hearted week!