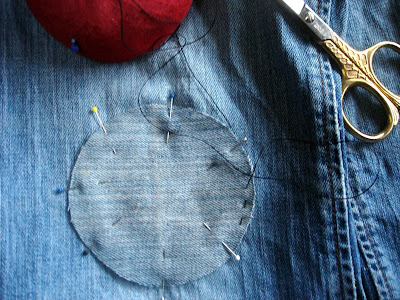 boro moon patch
This is a moon patch on the knee of my one remaining pair of gardening jeans. The others were annihilated when I had cloth fever. If I had realized that I could actually make them wearable again in a cool way, I would've restrained myself, but at the time they were considered a lost cause. In Japan, mended and patched textiles are referred to as boro or rags. These jeans are now officially boro.

The full-moon patch evolved into a half moon patch. This was some fun stitching. As I worked on it, I wished I could again "have at" the many jeans' knees I've patched over the years raising children --  to patch them with shapes and wonderful little stitches rather than those big old rectangles. And to have referred to the patched jeans as boro once they'd transitioned! 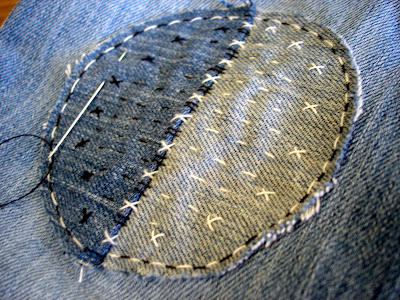 Today is a waning moonday in Libra, a time for connecting with other people, creating beauty, and feeling balanced. The lightness of this day brings great relief after the high energy of a fiery full moon in Leo followed by Virgo's work-oriented impatience last week. Things are finally settling down. Some of the qualities of the waning moon, cutting away excess in our lives, can be more easily achieved under Libra. That includes sorting, contemplating, and making decisions to bring about a sense of centeredness.

On a physical level, Libra affects the hips, bladder, and kidneys. Most conditions of these areas are too complex to go into here but I will mention an herbal diuretic that assists the elimination of excess water -- and that is the common dandelion, Taraxacum officinale. As soon as the darlings begin to show themselves, I gather the outer leaves to add to salads, or just pick and eat them on the spot. Dandelion is also a good spring tonic and the earliest pickings are not bitter. Later in the season, they will need to be simmered in a couple changes of water to remove that bitterness. A common folk name for dandelion is piss-in-bed -- usually an increase in urine is noticeable. Dandelion is high in potassium making it a better choice of diuretic than some synthetic ones that often wash out the body's supply requiring a potassium supplement to be taken as well.

Synchronizing with the energy of the moon works well for me right now. I've made a solemn pledge to myself to tend to unfinished projects begun within the last 30+ years. They must be revived, completed, deconstructed for stash, given away, buried or destroyed. Projects begun within the last year do not count as they reflect my current focus and passion. I am both embarrassed by and enchanted with the process. I will share some of it here as I go through them.

Anyone else feeling the need to do this? 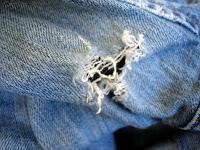 different hole, same jeans
Posted by Peggy at 11:39 AM