cooking from the nettle patch 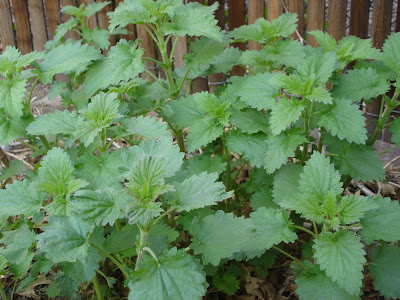 The nettle patch is filling out nicely so it's time to begin harvesting the tops to cook, dry, or freeze. It's good to collect them right now in early Spring to get a jump on the aphids because, well, we all know what a royal pain they can be. Starting now also delays blooming which is an important stage to notice. When buds begin to form, harvest is over because the leaves will contain a gritty particle that can be irritating to the kidneys.

Stinging nettle, Urtica dioica, is a nutritious wild weed and a medicinal herbal mainstay. I drink nettle infusion several times a week, my husband takes it to stave off allergy season, and we cook & eat our homegrown nettle. I can always buy it dried but can't ever buy it fresh, so it only makes sense to cook the fresh or freeze it for later. When I freeze it, I blanche it first, the same as for any leafy green, and bag in 2-cup quantities.

It took several tries to get this patch growing. It was only when I invited it that seeds from previous years suddenly sprouted (yes, they had been stratified before sowing). Now that the patch is established,  the dry Colorado climate keeps them in check. But I would imagine that in a better environment they could escape and thrive! 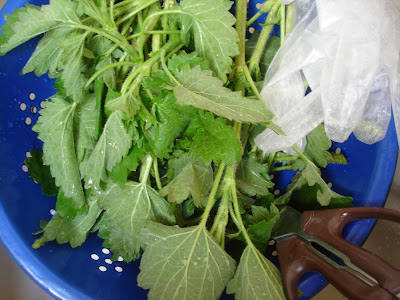 Usually, I pick them with my bare hands and a kitchen shears, being very careful, but when in a hurry, I wear gloves. Mother Nettle demands your full attention or she will sting you. Of course, her sting, itself, is a medicinal treatment for sciatica, arthritis, and muscle aches! 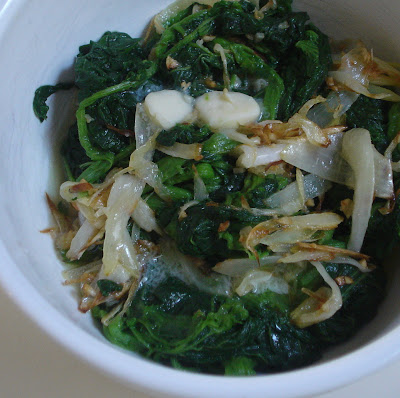 The first harvest of stinging nettle tops went into the cooking pot the other night. Next time it'll be marinated nettles or a nice pesto -- I'll post the recipes as I make them.

Rinse nettles, then add to boiling water. Cover & simmer for 20 minutes. During that time, chop the onion & garlic and saute in olive oil till tender. Strain the nettles, saving the water for soup or watering plants. Mix in the onion/garlic mixture, melt some butter on top, season, and eat the deep green essence of Spring.

If you grow nettles, how do you cook them?

Also posted at Food Renegade.
Posted by Peggy at 10:36 AM